The Alfa Romeo Mito has a trick new engine and revised steering and suspension. All this and the return of the Cloverleaf badge too. Exciting times for Alfa… 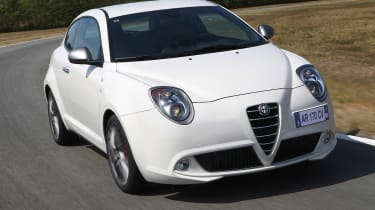 Sometimes a development comes along which makes you sit right up and take notice. And when it comes from a brand you really want to love, but which has had too many false dawns, then you feel especially warm inside. So please meet the latest Mito, newly endowed with Alfa Romeo’s extremely clever MultiAir engine.

MultiAir is nothing less than the greatest advance in petrol-fuelled piston engines since Daimler-Benz came up with fuel injection for the Messerschmitt Me109 fighter aircraft. Some of the motor industry’s biggest brains have been trying for years to devise a way of opening an engine’s valves by some means other than a mechanically acting camshaft, hoping to achieve variability of valve timing and lift beyond anything so far coaxed out of a camshaft and tappets. MultiAir has got there. How it works, and why it’s a good thing, is explained over the page. How well it works, you’re about to find out.

The MultiAir engine uses the Fiat group’s  long-established 1.4-litre ‘FIRE’ block. The head is all new, of course, and can be fed by a turbocharger for maximum benefit. Outputs are 103bhp without turbo, 133bhp with mild turbocharging (in which case CO2 output actually drops), and a very healthy 167bhp for the new top Mito – and the car we’ll be driving today – the Quadrifoglio Verde (‘green four-leaf clover’). Whether that name will be anglicised for the model’s UK debut early next year remains to be seen. Let’s hope it isn’t.

The Mito QV’s visual alterations are subtle, running only to green mock-carbonfibre cloverleaf badges and some tasty 17in wheels, but hidden away are new adaptive dampers and a new six-speed gearbox. Will this makeover finally be the making of the Mito?

Alfa’s cute but slightly dumpy supermini is, on the face of it, a great idea, bringing something of the look of the 8C to a sporting supermini aimed right at the sort of beautiful-object-appreciating, good-time-loving person who might consider a Mini Cooper. So far, though, it hasn’t quite cut it as a driving machine. That it feels so dull in its ‘Normal’ mode is partly why – you shouldn’t have to switch the so-called DNA control to Dynamic before the MiTo even begins to feel like an Alfa should – but the chief enthusiasm-dampener has been the rubbery, anaesthetised steering. Here, revising the power steering software has helped, and now it’s no worse than many similar electric systems. But being average shouldn’t be good enough for an Alfa, even one based on humbler underpinnings for reasons of economics. Hence the continuously adaptive dampers, which should not only massage the handling but also do good things to the steering.

First, though, the engine. The promise of minimal turbo lag isn’t quite kept, there being an initial softness that even the DNA’s Dynamic mode can’t entirely mask, but once past that the pull from low speeds is mightily impressive for a mere 1.4. Not quite as instantly impressive as that offered by the Volkswagen group’s combined turbocharged and supercharged 1.4, true, but the likely lower fuel bills and the meagre official CO2 figure are compensation. To combine 167bhp with 139g/km in a petrol engine is quite a feat.

Puff fades beyond 6000rpm, but the MultiAir’s gutsy nature, strong on-boost urge and crisp-edged exhaust note make that little real hardship, especially as there are six slickly shifting gears to make the best of the rev-span. If this is the future of ultra-frugal performance petrol engines, then it will still be worth getting up in the morning.

OK. So how does it handle? Altering a car’s damping has effects far beyond the obvious; good things can happen to the steering response and perceived feel, for example, which is what has happened here. The DNA control alters the dampers’ operating range, but even in Dynamic they let the Mito ‘breathe’ more freely over bumps while better resisting the build-up of roll. Result: the steering is sharper, its weighting more accurately reflects the forces acting on the front wheels, and you can enjoy the Mito’s innate pointiness without cursing the rubberiness. In short, you feel much more in touch with the road, and because the wheels stay in better contact with the tarmac there’s a lot less intervention from the ESP. All this means you can get the best from the Torque Transfer Control, the system that suppresses understeer by gently braking the inside front wheel when needed, and you can carry some serious speed through the sort of corners you’d expect to put the fire out.

Here, it seems, is the Mito as convincing hot hatchback. We’ll know for sure once we try it on UK roads instead of Fiat’s Balocco test track, but first impressions point to a very entertaining small Alfa. And we should all be pleased about that.

Alter the timing and lift of an engine’s inlet valves enough and you can do some clever things. You can optimise the valves’ opening periods to suit different engine speeds and loads, and get strong low-end torque and good high-rev power from the same engine. But you’re still limited by the mechanics of solid metal – until now.

MultiAir uses a conventional exhaust camshaft, but on it are four more lobes (one per cylinder) which represent the maximum possible lift and valve-opening duration. These lobes actuate small pistons which in turn actuate more pistons above the inlet valves (two per cylinder) via hydraulic channels filled with pressurised engine oil. So far, then, the system resembles a hydraulic pushrod.

Now the clever bit. Four solenoid valves similar to those used in ABS braking, one per cylinder and under individual control, can be opened at any time during the inlet valve’s movement to bleed off the oil. In that way the timing and lift can be accurately and instantly controlled within the ‘envelope’ of the cam profile, giving throttle control and a spread of lift and timing variation never before possible. MultiAir can even open the inlet valve twice in one intake stroke, when running at low speeds and loads, so causing a swirl of intake mixture able to mix and burn more completely.

The idea is to get more power from less fuel, with less CO2 produced as a result. And it doesn’t even – yet – have direct injection. ‘Give us another three years,’ says MultiAir mastermind Massimo Fulfero.

Alfa's master of suspenseDrive a recent Alfa Romeo, Fiat or Lancia and you will feel the hand of Philippe Krieff, suspension supremo. He is charged not only with making these three marques’ suspension systems work, but also with making the cars feel as the brand values suggest they should. He is the first to admit there is still work to do.

On the regular Mito’s sometimes rubbery feel, he leaps to the defence of the basic handling balance. ‘It’s quite stiff at the rear,’ he explains, ‘and if you turn in quickly the rear axle helps a bit with a little toe-out under lateral force. That can give you the rubbery sensation.’

Krieff is pleased with the Mito QV’s adaptive damping. ‘It’s a Skyhook system, continuously variable, able to control high-frequency wheel movement and the longitudinal braking and pitch motion. It uses information from three body sensors, two wheel sensors and the ESP to help control yaw rate and stability, checking each separate parameter every 10 milliseconds. And it can learn your driving style.’

He is also the man behind the Abarth 500’s massive improvement in driving dynamics over the regular 500. So what happened with the 500 Esseesse, the car that seemingly lives on its solid bumpstops? ‘That was done by the Abarth team. It has stiff springs, it’s lower, it looks good, but I don’t like it. I’m like you, I don’t like a car to be too stiff. It takes away the pleasure.’

The Fiat group’s king of chassis dynamics declares the 500 Esseesse a dud. That, to me, is a sign of great hope.