The 1M takes a trip to the 'Ring, and manages to hit an indicated 170mph on the Autobahn 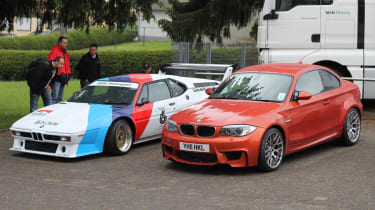 My first month with the 1M should’ve been a dream. But if you’ve been following my Fleet Tweets @evoNickTrott you’ll know I slipped a disc early last month and didn’t drive for some time. It happened four days after I took delivery of the 1M and just before I was scheduled to take it to the Nürburgring to watch the 24-hour race. Gutted. However, Stephen Dobie’s arm shot up when I asked who wanted to take the car out there, more of which to follow.

On another note, I’ve decided to vinyl-wrap the Valencia Orange 1M. The colour clashes with my hair. Honest! Initially, I was thinking of white or silver with M-stripes, like a BMW 2002 Turbo – and there’s a vague link in that I own a 1502 BMW (a poverty-spec 2002). However, I’m now tempted by something like the black Castrol CSLs that Hans Stuck jumped all over the Ring. Decisions, decisions. Any suggestions? Email or tweet me. Speaking of the Ring, over to Mr Dobie… Nick Trott

I was obviously full of sympathy for Nick and his back. But not enough to deny myself a small whoop of excitement at getting his 1M for a week, most of it to be spent at what is surely one of its natural haunts, the Nürburgring. I’d been itching to drive the mini-M3 since BMW first pulled the wraps off its cartoonish body, and seven days and 1500 miles seemed the perfect way to introduce myself to the editor’s new long-termer.

On the day-long run from Stamford to Nürburg it was everything I hoped it would be: effortlessly fast, comfy, refined and capable of swallowing my and film-maker Sam Riley’s gear. Never mind tripods and video cameras – his hat collection is huge. But Riley and I weren’t just at the Ring to stick cameras and microphones in the faces of evo’s racing drivers. We were attending the inaugural BMW M Festival, the highlight being the chance to drive the Nordschleife in the 1M. My boss’s 1M. On my first ever lap of the North Loop. In peeing-down rain…

Unfortunately (or perhaps fortunately) we got to drive just one lap, and that was behind a parade car. There was extra relief as our 1M’s brakes don’t feel fantastic, its hard life as a press car before arriving at Evo Towers perhaps at fault. Still, even at half-speed the Ring’s an awe-inspiring place to drive. It’s whetted my appetite for a trackday there.

The 1M performed well during the rest of the trip, ferrying us around the circuit’s extremities during all hours of the race, with a favourable response from the inebriated spectators littering the local area. But it was on the way home that the car and I really gelled: it was a willing partner for my first ever Autobahn blast, reaching an indicated 170mph with ease. And I’m sure we were hitting a limiter – one higher than the claimed 155mph – as the engine felt like it had more to give.

Downsides? A 27mpg average was impressive given our motorway V-max run, but the 53-litre fuel tank meant we had to fill up every 300 miles. The ride is also inescapably firm over rougher surfaces, which can widen your eyes when you’re well into three-figure speeds. I’m nitpicking, though. This car is what the M3 should still be, and handing the keys back was hard. Stephen Dobie