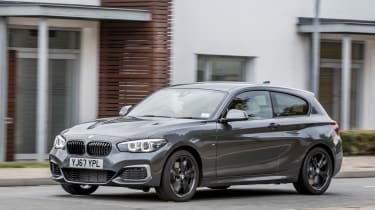 In today's hot hatch marketplace, around thirty thousand pounds generally gives you plenty of options. Most are based around turbocharged four-pot engines with clever AWD systems or tricky front suspension to help deploy the power, but BMW offers something a little bit different.

>Click here to read about our favourite hot hatches

A subtle upgrade over the M135i, the change of name came with a 14bhp upgrade as well as a suit of small under-the-skin changes polishing the edges off the previous car.

One would think that this being a BMW, the price would be a few thousand more than non-premium rivals, but thanks to a constant creep upwards in pricing within the premium hot hatch class, the M140i’s entry-level price of just over £32,000 suddenly sounds like pretty good value. 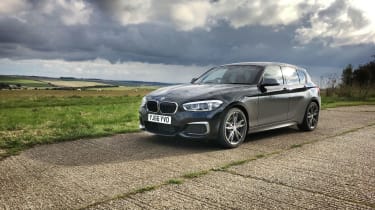 Performance and 0-62mph time > When fitted with the popular 8-speed ZF automatic option, the M140i will hit 62mph in just 4.6 seconds. With a 6-speed manual the time extends to two tenths of a second to 4.8.

Ride and Handling > This is arguably the BMW’s achillies heel, unlike more focused rivals, the half strength ‘M Performance’ moniker means that above 8/10ths the BMW can start to feel out of its depth, lacking the total control and capability of the best of the breed.

Interior and tech > BMWs ergonomic excellence continues inside the 1-series, and BMW’s i-drive system is as good as it has ever been thanks to constant upgrades.

Design > Since a mid-life facelift in 2014, the new 1-series looks far more cohesive front and rear. It still can look a little frumpy from some angles, but isn’t so ugly to turn buyers off in the showroom any more..

Being at the top of the food chain in the M Performance range, you’ll find plenty of amenities in the M140i as standard. This doesn’t mean it’ll break the bank, though, with prices starting at around £32,000 for the three-door, and just an extra £500 needed to add another two doors for more practicality. If you’d prefer to have your car equipped with the excellent 8-speed ZF automatic gearbox, it’ll come at the cost of £1400.

Despite the fact it’s not quite a full-blown M model like the new M2 Competition, the M140i does feature tweaks to help separate it from its diesel counterparts. M Performance specific mirror caps and 18-inch alloy wheels can be found, alongside other standard features such as LED headlights and larger M Performance brakes with 4-pot calipers on the front axle.

Leather seats, ‘business’ satnav on a 6.5-inch screen, climate control and an ‘M Sports’ steering wheel all feature as standard, but we’d recommend ticking the box for the 8.8-inch 'professional' satnav upgrade for £900. If you want to go all the way, the ‘drivers innovation’ package can be had for £1795, bundling the professional satnav with cruise control, heated seats, BMW Online services and wireless phone charging among other things.

The similarity-priced Ford Focus RS might have more power and capability when pushed hard, but when you consider the standard features and quality of finish you get, the BMW seems a tempting offering. There are plenty of rivals at this price point, at just over £30,000, but most lack the polish of this car for everyday driving.

If you want your rival hot hatch to have an equally posh badge, Audi has the newly improved S3 for £33,000, although it has the highest quality interior, it is the least fun to drive of all the above options.

> For an in-depth review of the BMW 1 Series, check out our sister site Carbuyer 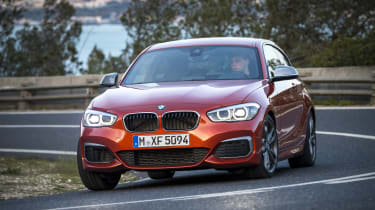