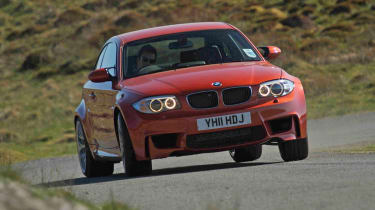 The BMW 1-series M Coupe, or the 1M Coupe if you want to avoid using a clunky name for what is in incredibly punchy car. Punchy in its performance, styling and pricing. Launched in 2011 with a £40,000 price tag, it looked expensive for a 1-series but significantly undercut BMW’s own M3 and the Porsche Cayman S, cars it seriously challenged for outright fun. That used examples fetch little less two years on is testament to just how well BMW judged the market. And how good the car is…

The BMW 1M was among the first proper M cars to use turbocharging; it may have vexed the purists, but its engine is a belter and a big part of its appeal. Driving the rear wheels via lovely slick six-speed manual gearbox is a 335bhp twin-turbo 3-litre straight-six engine. In the 1495kg 1M Coupe, it yields a 4.8sec 0-60 time and an electronically limited 155mph top speed, though we’ve seen an indicated 170mph on derestricted German autobahn.

There’s an MDM button, which partially or fully deactivates the stability and traction control systems, while an M button alters the throttle response. Unlike bigger M cars, this button isn’t programmable; the upside is a lack of technological confusion when you simply want to get on with the business of going fast.

It also boasts a proper limited-slip differential, where its nearest thing to a successor, the BMW M135i, gets an electronic setup.

It’s a strange thing when the manual ’box is no longer the norm in a performance car. The BMW’s shift is light but it still possesses that feeling that the internals are made of nylon. It’s lovely.

The 1M feels busy all the time on bumpier stretches of road but it really only struggles over the bigger compressions, where it lacks a bit of travel in the suspension. What it doesn’t do is wallow. Every input to the short wheelbase from the road below or with the direct, meaty steering is met with an immediate reaction, so you are continually involved. A small bundle of excitable energy, if we were to call on a canine analogy, it’s terrier-like.

The 1M’s twin-turbo straight-six is a stonker. It’s almost utilitarian in the way it delivers its huge punch, yet it still manages to have that classic BMW note – gritty yet aristocratic. It’s hard to believe just how fast the pint-sized 1M is until you experience it, but at times it’s almost unsettling. There’s no doubt this is mostly due to the 1M’s abundance of low and mid-range torque, which properly shoves this little coupe down the road. An overboost function provides an extra 37lb ft for short bursts, peak torque climbing to 369lb ft. That’s serious grunt, especially in something this size.

The 1M’s short wheelbase and lack of roll mean that it can feel quite a snappy car over the limit, but with the throttle set to Sport (the one and only setting you can change) you have the perfect tool to keep the rear wheels spinning just as much as you want - once sideways it seems to stabilise sweetly, albeit with a lot of tread being shed from the tyres. Fifty-fifty weight distribution and the M diff allow for hugely entertaining moments with the traction control switched off, but you do need to be quick with your reactions.

Our main criticisms are the slightly feelless steering and the brakes, which wilt under hard use – particularly on track – way too easily. It has been a BMW M car weak point for years, but appears to be on the mend with the latest generation of models. Buy a second-hand 1M and this is an area ripe for an upgrade.

At the time of launch, the BMW 1M Coupe saw off the Porsche Cayman R, Nissan 370Z and Audi TT RS in a group test, while it finished impressively well in our 2011 evo Car of the Year contest, sharing the podium with the McLaren 12C and Porsche 911 GT3 RS 4.0, putting paid to the Cayman R (again) as well as the Lamborghini Aventador, Ferrari FF, Jaguar XKR-S and its recently launched big brother, the BMW M5. While the big V8 saloon’s values plummet on the used market, the 1M’s talent is reflected in sold investment potential.

Perhaps the most challenging alternative to picking up a 1M nowadays is the lure of the car which effectively replaced it, the BMW M135i. Brilliant though the hot hatch is, it’s no direct replacement; it’s not a full-strength M car, it doesn’t have a proper diff, and it’s not a coupe. It will also struggle to maintain its value – especially as, unlike the 1M, it’s not limited to 450 units in the UK. Nope, if you want to see what the ‘next 1M’ is like, the possibility of an M2 version of the forthcoming 2-series coupe is your best bet… 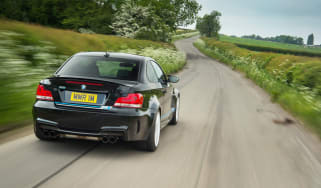 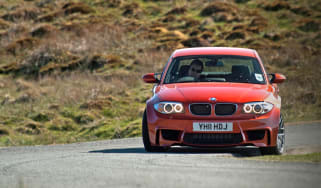 Win a track evening in a BMW 1 Series M Coupé with evo and Michelin!

We've got together with Michelin to give one lucky winner the chance to attend an evo track event.
Skip to HeaderSkip to Content