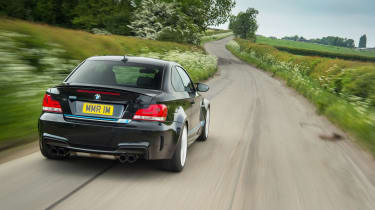 BMW’s 1-series M Coupe of 2011-2012 isn’t the most obvious car to embark upon a tuning project with. Only 400 of them came to the UK and second-hand values rarely drop below the original asking price of £40,000.

This is not the sort of situation that creates an insatiable appetite for aftermarket tuning and parts. And besides, performance from the 1M’s 3-litre straight-six always seemed sufficient, while its chassis and drivetrain – even though they borrowed parts from the contemporary M3 (the V8-powered E92) – imbued the 1M with a tougher, more rowdy character than most other M-cars.

> Read our review of the standard BMW 1M Coupe

Not bad for a parts-bin special, but also not perfect. Like many M models of the time, its single-piston sliding-caliper brakes were lacklustre on the road and woeful on track. And its non-M division engine – one of the first turbocharged motors to go into an M-car – didn’t have the soundtrack, the red line or the intensity to live up to the glorious naturally aspirated motors that preceded it. 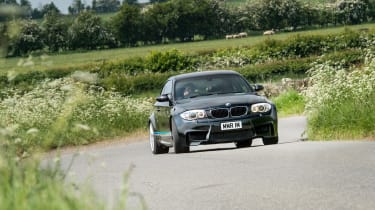 Room for improvement, maybe, but any modifications need to be carried out sympathetically if they are not to ruin the 1M’s naughty nature and iconic appeal. Ideally they should also be reversible, too, should a return to the car’s original state be desired.

The upgrades carried out by MMR Performance for the 1M come from just such a position of respect. There’s a Stage 2 software upgrade (£499), MMR’s own intercooler (£549) and charge pipes (price TBC), an Arna carbonfibre intake system with a Pipercross filter (£859), and a titanium Akrapovic exhaust (£6156). Together they take the 1M from its standard 335bhp and 369lb ft of torque to 426bhp and 479lb ft.

The chassis, meanwhile, has been treated to Bilstein B8 dampers and Eibach Pro-Kit springs (£846) – rather than a more extreme adjustable coilover set-up – as well as Eibach anti-roll bars (£550). And, most importantly, MMR has worked with Alcon to provide a six-pot front and four-pot rear brake arrangement with two-piece discs all-round (£5400), operated through braided brake lines (£109).

You can instantly tell this is a more serious 1M from the sharp bark as you start it. Then, as you rev the engine, there’s a howl that’s equal parts traditional straight-six and superbike. The exhaust, carbon intake and new engine map feel as though they’ve removed some mass from the turbo straight-six’s internals and it revs with abandon as you blip the throttle for downshifts. The Akrapovic’s rasp and the engine’s eagerness mask the 1M motor’s more humble origins and make it feel far more like a ‘proper’ M engine. However, it doesn’t necessarily feel like you’re accelerating much harder or going significantly faster than in a regular 1M. 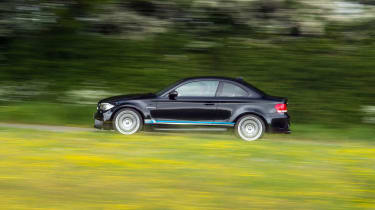 The chassis changes have made a greater difference. Although the new suspension has lowered the entire car, the front is now proportionally lower than the back. You don’t notice the extra rake when simply sitting in the car, but turn into a bend and this 1M’s nose acts like the snout of a beagle after it’s caught a scent: low to the ground, following every bump or crest in the tarmac and reacting instantly to your steering inputs.

The front-end is made even more accurate by the new brakes. On the road the potential extra force and resistance to fade is barely tested, but the middle pedal is markedly firmer and its action far more linear. So rather than the instant bite followed by gradual tailing off that comes from the standard brakes, any additional pressure on the pedal generates a commensurate increase in braking force. On the road, there’s no sign of fade whatsoever.

> Find out what the latest BMW M3 is like to drive

The 1M’s inherent elbows-out attitude is exaggerated by the new stance, too. With the front hunkered down and stuck to the road, the back end is even more inclined to help push and pull the car around. There’s very little roll, so body movements don’t deaden the engine’s effect and you can precisely feel the rear wheels forcing the car to rotate. The trade-off for the tight body control is a ride that isn’t quite as comfortable as the standard car’s: it’s harsher over bumps and you do feel rough roads more intensely through the seat. 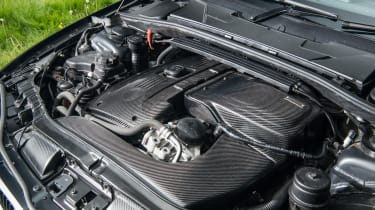 The totally locked-down front end and reined-in body has also taken away much of the standard 1M’s snappy behaviour. Push the stubby BMW hard and it no longer retaliates with the same hostility, so you can now edge up to the rear tyres’ limit of grip with complete confidence. And this is where the engine’s extra power and torque start to make real sense, as they bring the car’s most enjoyable side – when it’s right on the edge of traction – within easy reach.

> Is the new BMW M2 Competition a true successor to the 1M?

MMR’s 1M may not feel a whole lot quicker than a regular one, but what additional performance has been extracted from its engine is perfectly supported by all the other upgrades fitted. Together they exaggerate the 1M’s fun-loving nature, while at the same time making it feel even more exotic.

With second-hand prices of the 1M remaining strong its direct rival is BMW’s latest small M car, the M2 Competition. Thanks to its exuberantly flared arches, the standard 1M looks more distinctive than the new M2, but the modern car’s proper M division engine means it fizzes with more aggression. MMR’s upgrades instil the 1M with that same purpose and make it even more powerful than the 404bhp M2, too. However, depending on how much you can buy a 1M for (probably not much less than £40,000) all of MMR’s modifications (around £15,000 in total) will make it more expensive than a new M2 Competition (£49,285), but history suggests that the 1M will hold its money, even with a few modifications. 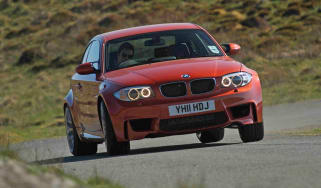