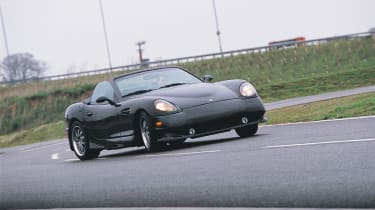 To understand the Panoz Esperante, and why you should take it seriously, you first need to understand the Panoz family and its achievements. Twenty years after founding pharmaceutical giant the Elan Corporation, Don Panoz decided to retire. It wasn’t a conventional withdrawal from the workplace. After successfully building a world-class hotel chain, which includes a 33,000-acre golf resort and winery in California, the Panoz family applied its acumen to the motor industry and motor racing, forming Panoz Auto Development and later Panoz Motor Sports Group. Collectively, these companies have designed and built their own road and GT race cars, founded the American Le Mans Series, redeveloped the Sebring, Road Atlanta and Mosport race tracks, and supplied chassis for Indianapolis 500-winning Indy Racing League cars. And those are just the highlights. So what of the Esperante? Currently only on sale in the US, Panoz produces them in extremely small numbers (just 400 have been built since 2000), trading on the kind of bespoke appeal a company like Wiesmann enjoys in Europe. Even so, it’s still hard to make a case for the car’s eye-watering $120,000 (£65,000) basic price given that the Esperante borrows a number of major components from the humble previous-generation Mustang. That said, this 1.5-ton, alloy-bodied sports car is a clever combination of innovative Panoz engineering and tried-and-tested Ford parts. The engine is a quad-cam 4.6-litre V8 – in this case a hand-built, supercharged, 420bhp version supplied by Ford’s Special Vehicle Team (SVT) – while the chassis uses a Mustang central floorpan, firewall and windscreen frame, with Panoz-designed aluminium extrusions front and rear to carry the engine, suspension (double wishbones at each corner) and six-speed Tremec manual transmission. The result is a curvy, if somewhat awkward-looking, front-mid-engined sports car with plenty of poke and a stirring soundtrack. Panoz claims a 0-62mph time of 4.2sec, and 100mph in under 11sec, which sounds feasible, although, frankly, the suggested top-end of 180mph doesn’t. Although this US-spec test car is clearly all-American in design and set-up, it shows potential. Yes, the suspension is too soft, but the balance is impressively neutral and encouragingly benign, even with all that SVT grunt going to the rear wheels. The brakes are strong and feelsome, too, although the pedal layout is far from ideal, requiring a double-jointed right ankle to execute heel-and-toe downshifts. The steering could be quicker-witted on turn-in, but there’s decent feel. It would still be easy to write-off the Esperante as an overpriced American curiosity, though, were it not for the racing version’s success in the ALMS and British GT Championship, and the fact that Team LNT, the British race team currently mounting an impressive global assault with the Esperante GTLM GT2, is currently developing the road-going Esperante for Europe through its newly-formed subsidiary, LNT Automotive. Styling tweaks and firmer suspension tailored for the demands of British roads and drivers will be a good start, but it’s hard to see how LNT can do much about the pricing, so it’s going to be a tough sell given that the brand has little provenance in the UK and the sector is crowded with cars like the M Roadster, Morgan, Wiesmann, assorted TVRs, etc. However, racing success is a proven method of achieving wider recognition, and the GTLM GT2 recently beat Porsche to a class win at Sebring and has achieved podium finishes in both the FIA and British GT championships. And with the might of the Panoz family behind the Esperante, you’d be brave to dismiss its chances.