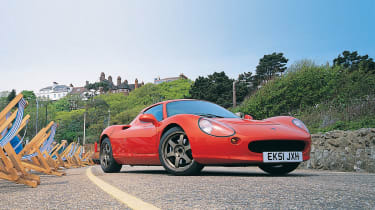 Remember the Vemac, the Honda-engined sports car developed by Chris and Luke Craft of Rocket fame and featured way back in evo 044? Well, it’s been on sale in Japan for some time, and it’s now also available in the UK. So, should you consider it?

The original Vemac was powered by the old Japanese domestic market Integra Type-R’s 1.8-litre four placed longitudinally with a bespoke gearbox. These days it’s powered by the JDM Civic Type-R’s 2-litre ‘K20’ unit, sitting transversely in the car, allowing the Civic’s superb six-speed to be retained, but at the cost of raising the car’s centre of gravity a fraction. That should hardly be noticeable, but the power hike from the old 180 to 220PS (217bhp) certainly should be.

To find out for sure, we drove a new RD200 30 miles south-west of Tokyo to the Toyo Tyres Turnpike. The road starts at sea level, just a few hundred metres in from the beach, but climbs rapidly to 1000m through a series of high-speed curves and long hairpins over eight and a half miles. As a benchmark, we also took along a Lotus Exige S, which is nigh on the same size and weight (around 900kg), and knocks out an almost identical 218bhp.

The Vemac’s carbon and Connolly leather seats feel even lower than the Exige’s and the gearlever is on the driver’s right, mounted on the leather-clad door sill. Standard equipment includes electric windows and air-con strong enough to cope with Japan’s 40C, 90 percent humidity summers, and enough leg- and headroom to accommodate anyone up to 6ft 4in comfortably.

The V-TEC motor positioned directly behind the driver’s head makes plenty of noise, but it’s a far more pleasing roar than the supercharger-dominated Lotus. Although, as World War II fighter pilots will attest, that supercharger makes all the difference at altitude, where the Exige demonstrated a distinct power advantage. Everywhere else, though, the Lotus felt almost tame in comparison to the Vemac, which should give some clue as to how truly hardcore a machine the RD200 is.

Keeping the V-TEC in its 6000rpm-plus sweet-zone is easy thanks to that slick type-R box, and acceleration through the gears is as smooth as it is rapid. You can easily find yourself bouncing off the 9000rpm rev-limiter. Vemac doesn’t have an official 0-60 time for the RD200, and our chosen course wasn’t flat enough to find one fairly, but suffice to say that it could keep up with the Exige S (0-60 in the low 4s) on the straights below the cloud-line, if not above it.

Through the high-speed bends, the Vemac felt better planted. Where the Exige’s tyres began to lose grip and the front would start to wash wide, the Vemac just hunkered down and ripped round the corner, displaying an incredibly neutral balance. Steering is light, transmitting every ripple and dip in the road through the wheel, which is a good thing at speed on well-kept roads, though it can lead to tramlining on well-worn highways. The suspension features fully adjustable Showa dampers.

In essence, the Exige S is an unusually rapid road car that’s suitable for days at the track. The Vemac however is a race-bred track car that can be used every day.