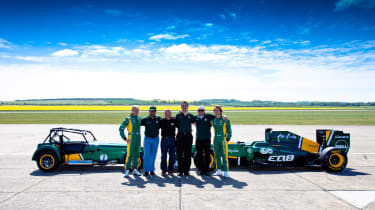 Caterham Cars has been bought by Team Lotus Enterprise. To be more specific, the three men behind the Team Lotus F1 squad, Tony Fernandes, Kamarudin Meranum and SM Nasarudin, have bought Caterham Cars from the previous shareholder consortium headed by Corven Ventures. (Just to clarify, Team Lotus is entirely separate from Group Lotus which is based in Hethel and builds the road cars)

What does this mean? Well, don’t worry, the Seven isn’t going anywhere – far from it. Ansar Ali, the current managing director of Caterham, will still be very much in charge of the company, which is good news, and manufacturing is not about to be moved from the UK. What will change with the new ownership is that Caterham can expand and grow thanks to greater investment. It should also have a mind-boggling amount of new exposure through its links with the F1 team.

The first thing that looks likely to happen is that the Caterham race series will be taken to new markets, specifically in Asia. This clearly makes sense because it’s a successful formula that has worked in Europe and there is no reason it can’t work elsewhere. As the new backers already have links with karting as well as GP2 and F1, there is the possibility of an entire motorsport ladder coming under one organisation.

In terms of road cars, the initial steps could be towards developing an EU5 compliant R500-type engine. At the moment, because of regulations, the UK is the only country to get the R500 brand of loopiness and other markets are crying out for it. With the new investment there will be the money to develop such an engine. Beyond that there are no firm plans, but there is a desire to build a new car that is both appealing to and affordable for the enthusiast market. Both Ali and Fernandes were keen to stress that it would have to be lightweight and would need to encapsulate the same driving ethos as the Seven (let’s stress again that a new car would be in addition to, rather than a replacement for, the Seven). For obvious reasons they are keen that a new car should have some F1 technology in it, but there is also a stipulation that it should cost between £20,000 and £30,000, which is fantastic news.

We were sceptical when the announcement of the buy-out was made this morning. After the grand and slightly baffling plans that Group Lotus (they of Elise, Evora, Esprit, etc, and completely separate from Team Lotus…) announced last year, which seem to take that company into a completely different league to the one they currently reside in, we were concerned that the same might be about to happen to Caterham. But after speaking to both Ali and Fernandes it’s clear that nothing could be further from their minds. The new money will allow the people at Caterham to explore new ideas and hopefully grow the business sensibly, but it is not about to change the essential ethos of what already exists. To celebrate the new ownership, Caterham launched a limited run of Team Lotus Special Edition Sevens. The pack can be applied to any car in the range and will include, amongst other things, the famous green and yellow paint scheme you can see in the photos plus a plaque with the signatures of Jarno Trulli and Heikki Kovalainen. The £3000 pack also includes a tour of the Team Lotus F1 factory.

Watch out for full interviews with Ansar Ali and Tony Fernandes on the website tomorrow.