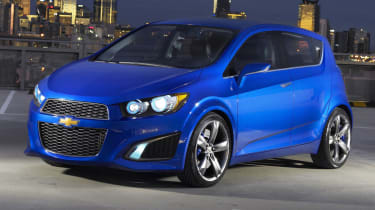 ‘American’ and ‘hot-hatch’ used to be two mutually exclusive entities, but now Chevrolet is breaking the rules. Here’s the funky new Aveo RS.  Based on the small hatch due in Europe in 2011, the RS is a 136hp show car being readied for public unveiling at the Detroit motor show next week.  Power comes from a 1.4-litre Ecotec turbocharged engine, mated to a six-speed manual gearbox and front-wheel drive. On the face of it, the baby Chevy doesn’t look too bad. There’s an obvious slant towards younger buyers, with large 19in wheels, blue brake callipers, twin centre exhausts poking out of the rear and a large black double honeycomb grill up front. We wouldn’t blame you for thinking ‘Misubishi Evo X’ when looking at that gaping and garish front end. Inside, the blue theme continues on the trim and backlighting, which serve to break up all the gloss and matt black. There’s a surprisingly contemporary look to the cabin, which is certainly no bad thing considering the at-best mediocre Aveo we suffer in the UK at the moment.