Diesel supermini that’s fun and cheap to run, if not so cheap to buy 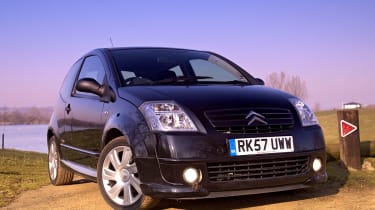 The Skoda Fabia vRS showed the world in a not very showy way just how good a diesel hot hatch can be. Frugal and fun, a rattly riot. It’s become something of an underground cult, with a legion of fans that never shout about what they drive but just look rather pleased at the fact they can clip an apex whilst getting over 50mpg.

Renaultsport’s also been in on the game for a while with its Mégane, and SEAT too with its FR, but Citroen is the only one to mix sporty and thrifty in a really small package: the C2 1.6HDi VTS. It looks just like the petrol VTS (unless you know your 16in Cheetah alloys from your 16in Suzuka alloys), which means funky, if perhaps a little upright. The 1560cc four-cylinder puts out 107bhp at 4000rpm and 142lb ft of torque at 2000rpm, which spirits the diesel VTS to 60mph in just under nine and a half seconds. Foot to the floor in top (fifth) it’ll hit 120mph. However, the alluring figure for most prospective buyers will be the 64.2mpg it achieves on the combined cycle.

Start it up and it sounds like a piece of farm machinery, and it continues to do so as you potter off down the road. It feels like you have to rev the engine more than you might expect to get the best out of it, but the punch in fact comes at a perfectly reasonable 2500 to 4000rpm and punts the little C2 along the road briskly, if not inspirationally.

The seating position is a little like being in a high-chair and the pedals are a bit light and floppy – until you try the brakes, at which point you’ll find a lot of resistance somewhere a couple of centimetres into the travel, making for rather jerky approaches to corners.

Which are where things get interesting, because the C2 has a fantastic chassis. It thrives on the small, tight backwaters where even a larger hot hatch would be treading gingerly. You can feel the short wheelbase underneath you and there’s a stiffness and sharpness to the way it tackles corners. Lift off and it’s alert and instantly reactive.

It’s disappointing that the steering offers little in the way of feedback, but it isn’t disastrous, and it’s certainly no reason to have an ESP system that, when turned off, automatically cuts back in above 20mph. Its limits aren’t too invasive, but with such a brilliantly playful chassis beneath you it’s frustrating feeling the grasp of individual brakes just as everything’s getting exciting. It’s a shame that you wouldn’t even be able to turn it fully off for a trackday.

It’s still fun to buzz/drone around in the HDi VTS and, of course, ultimately it’s all about the smelly black stuff with this car. But a word of caution to all potential spendthrifts: the HDi costs £1000 more than the faster, quicker, 40kg lighter petrol version and it could take you over 25,000 miles before you reaped that back in fuel bills. Yes, it’s Group 6 instead of Group 8 insurance, but the extra grand also means that you’re paying £13,595 for a C2 and, frankly, the cheap interior and generally slightly flimsy ambience of the little Citroen just can’t live up to such a billing. I’d hunt out a second-hand Fabia if I were you. 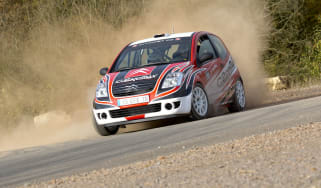 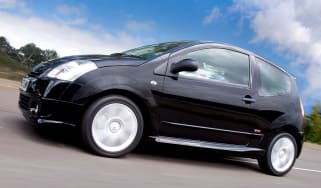 Citroen's latest won't cause sleep loss for sportscar drivers, but it has other strengths...
Skip to HeaderSkip to Content