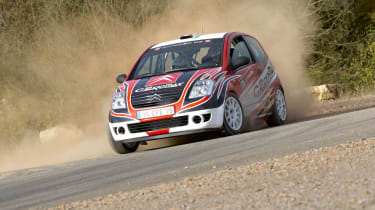 Officially launched at this year’s Rally France (or Corsica, as anyone worth their bobble hat would prefer to call it), the C2-R2 MAX is the latest, fastest evolution of last year’s super-successful C2-R2. Citroen Sport developed the C2 for the FIA’s new Group R regulations, which were conceived to form the base of a pyramid that extends via Super 1600, Group N and Super 2000 categories to the full-on WRC cars at the pinnacle of the sport.

With big brother C4 dominating the WRC, it’s no wonder Citroen’s Group R challenger is regarded as the car to have. Built to run at the weight limit of 1030kg, the diminutive C2-R2 MAX boasts a sizeable power-to-weight ratio of 184bhp per ton, thanks to lightweight doors and rear hatch, and a thoroughly tweaked 1599cc motor. This uses a bespoke exhaust, lightweight valves, new intake system and rorty camshaft (amongst many other things) to scream out 190bhp at 7750rpm and rev to 8400rpm.

The MAX also boasts improved cooling, a new hydraulic power steering rack for improved feel and response, a five-speed sequential transmission and ZF limited-slip diff, floating 302mm front and 280mm rear discs gripped by four-pot and two-pot Brembo callipers respectively (with no servo assistance or ABS for better feel and control), triple-adjustable front and rear competition dampers and a range of springs to suit every surface.

This comprehensive package of components can either be supplied as a £25,000 kit to be fitted by a third party, or alternatively Citroen Sport will build you a C2-R2 MAX from scratch for a reasonable £46,400. Either way you get an absolute firecracker of a rally car.

The driving position is typically upright compared to that of a circuit racer, but it still feels businesslike sitting behind the deeply dished, suede-rimmed steering wheel. A comforting lattice of steel tubing criss-crosses the otherwise naked interior, while a crowbar-like gearlever and equally prominent handbrake lever sprout from the floor.

Flick on the ignition and a bright, expensive-looking LCD dash comes to life, the buzzy little 1.6-litre engine’s vital signs displayed in vivid colour. All the controls feel light, very light actually, which seems appropriate given the C2’s slight stature but doesn’t fill you with an immediate sense of connection. No time to procrastinate though, for my guide – occasional WRC driver, front-running Junior WRC driver (in a C2-R2) and protégé of the late Colin McRae – Kris Meeke is keen to get on, and is soon encouraging me to get the Citroen fizzing.

Sequential ’boxes always work best when you’re nasty to them. With plenty of revs and a positive pull back on the lever, you don’t need to bother with the clutch as you bang up through the gears, though it’s advisable to use it for downshifts. Driven like you’ve stolen it – or like a motoring hack – the MAX really sings.

Such is the total lack of inertia I’d swear it weighs even less than a ton as we zig-zag our way through a right-left-right chicane. Admittedly it doesn’t have much torque to deal with, but even out of these super-tight first- gear turns there’s minimal wheelpsin or fight through the steering, just terrific traction and an infectious urgency to get to the next corner.

On the loose cinder sections it dances, the nose seemingly always nailed while the tail slips and floats along playfully in its wake. You need to be busy with the steering wheel to remain in sync with the slides, but it’s all well telegraphed and sufficiently slow-mo to flatter ham-fists. On the tarmac sections it’s devastating: precise with terrific grip and gymnastic agility, and utterly awesome on the brakes. For those who are serious about a career in top-level rallying, the C2-R2 MAX is the perfect way to start.