Grand Am car video at Silverstone 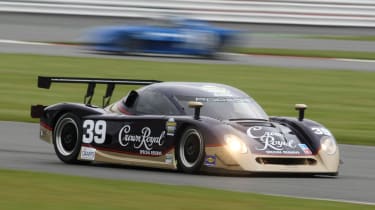 Last year I went to Daytona to watch its famous 24-hour race and was blown away by it (see the video here). Now I’ve had a chance to drive one of the front running DP machines I’m desperate to go back – the car was simply stunning to drive and as you’ll see in the video, all the other cars testing at Silverstone became nothing more than slow moving chicanes. Sunoco have for the past two years been running a competition for drivers in British championships to win a seat with a top team. This time around the winner was Ross Kaiser won the 2010 Radical UK Cup and to give him as much familiarisation time as possible they ran this car for him at Silverstone. I used to race against Ross and it’s brilliant that he’s finally got a break, because he certainly deserves one, for he’s very talented. In fact, in the first test at Virginia International Raceway he impressed everybody, including all the teams testing and the regular drivers, particularly when he posted the fourth fastest time. This is the 2007 Crawford DP03 Porsche, which was driven that year by Eddie Cheever, Christian Fittipaldi, Sasha Maassen and Emmanual Collard. It boasts a 4-litre flat-six back developing somewhere north of 500bhp. Ross tells me the current cars are significantly faster and he’s loving every minute of it.