Devastatingly quick on track, the Gumpert Apollo S had ability to match its brutal looks 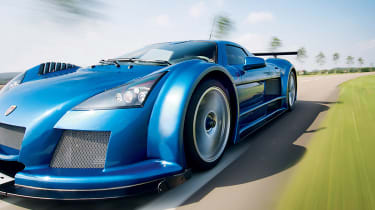 The brainchild of former Audi engineer Roland Gumpert, who was based in Altenburg in the far east of Germany, the genesis of the Apollo leaned heavily on his racing experience and his enduring links with the Ingolstadt manufacturer.

Gumpert Sportwagenmanufacktur was established in 2004, and the first customer Apollo appeared the following year. Using a twin-turbocharged version of Audi’s 4.2-litre 90-degree V8 – complete with lightweight internals – and mated to a six-speed sequential transmission, the Apollo was initially offered in three versions: the 690bhp S as tested by evo back in 2006, the 641bhp entry-level Apollo or the lighter and more powerful (789bhp) R. Even in S trim, it cost over a quarter of a million and promised a top speed of around 225mph, together with mind-altering race-car-for-the-road dynamics.

It wasn’t all whiz-bang, OMG acceleration, though. Belying its intimidating looks, the Apollo is an easy and undemanding car to guide at sane speeds, with steering that is both light and linear, the front end responding directly but with encouraging feel. Massive reserves of grip, yes, but it far from dominates the experience. The Apollo’s chassis is talkative and reactive with the reassurance that the front tyres are the first to find their limit, the tail feeling supremely tied-down, even at the extremely elevated road speeds of which the Apollo is capable. On a track, it’s just mighty. Around evo’s test track the only supercars faster are the Caparo T1 and Ferrari 458 Italia.

In 2010, Gumpert announced plans to put a second model, the similarly rapid but more attractively styled Tornante, into production. Sadly Gumpert Sportwagenmanufacktur went into administration in 2012 and any further production is now in doubt.