Ferrari GTC4Lusso review - the ultimate in practicality and performance?

Impressively agile and with improved tech, but the GTC4Lusso isn't as alive as some might expect a Ferrari to be 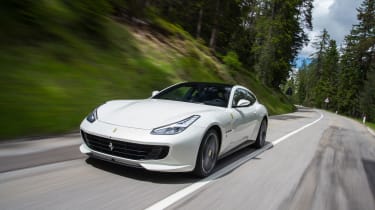 The Ferrari GTC4Lusso is the new FF, which means it is Ferrari’s version of practicality. Like the FF, the new car has four seats and four-wheel drive, but it also adds four-wheel steering into the mix. In profile the shooting brake/breadvan design has been made a little sleeker and there is a lovely gill detail behind the front wheels. We’re not quite so convinced by the more cluttered rear with the two pairs of taillights though.

No turbochargers here, just 6.3-litres of naturally aspirated V12 with a compression ratio of 13.5:1 and a redline set at 8250rpm. Headline outputs of 680bhp and 514lb ft arrive high up in the rev range, but Ferrari claims that 80 per cent of the torque is available from just 1750rpm. Despite a kerb weight of 1920kg, the GTC4Lusso is capable of sprinting to 62mph in just 3.4 seconds, helped no doubt by prodigious traction off the line. Maranello clams it will top out at 208.

As you would expect, the gearbox is a paddle-operated seven-speed dual clutch. It is linked to Ferrari’s latest 4RM EVO iteration of its unique four-wheel drive system. A power transfer unit (PTU) takes power directly from the crank at the front of the engine and then splits it between the front wheels. The claimed benefits of this Ferrari-patented system are reduced weight, better weight distribution (47 per cent front, 53 per cent rear in the GTC4Lusso) and faster response times. 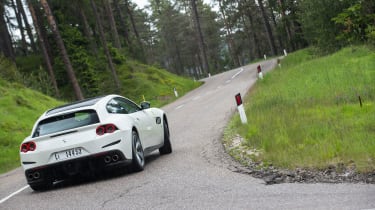 As before, the 4RM Evo works with the E-Diff, the F1-Trac the latest Side Slip Control (SSC4) and the SCM-E Magnaride suspension. However, the GTC4Lusso also adds 4RM-S rear-wheel steering into the mix. Unlike the F12 tdf where it was used to improve stability, the 4RM-S in the GTC4Lusso is designed to increase the car’s agility on the way into corners.

The other big technical highlight advances are in the cabin. There is a new steering wheel, which has a slightly smaller centre boss and improves the accessibility to the indicator and headlight buttons. There is also a rotary switch for the windscreen wipers, which makes more sense.

Dominating the centre of the cabin is a huge 10.25-inch touch screen (although it can also be navigated by a neat pod of buttons). It is a vast improvement on the old system and is nicely intuitive to use. There are still two smaller screens either side of the analogue rev counter (each with their own set of controls…) and you can also spec an extra 8.8-inch touch screen to go directly in front of the passenger. This seems like one screen too many really, as the main central screen is easily accessible by the passenger anyway. 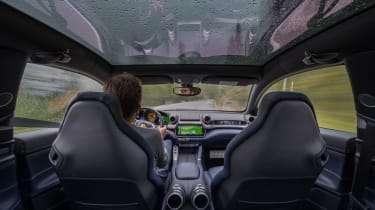 On the beautiful (but crowded) hairpins of the Sella Ronda in the Dolomites, the GTC4Lusso felt surprisingly nimble for such a big car. The bonnet still feels long and the front wheels a little remote, but there is precious little lock or effort required to guide it round the bends. While you can’t specifically feel the 4RM-S working, you would have to attribute at least some of this agility to the activities of the rear wheels.

We’ve been amazed at the ride of Ferrari’s sportscars over the last few years, so it’s no surprise that its more GT-orientated offering is incredibly refined over rough tarmac. Even without the bumpy road button activated the wheels have this wonderfully relaxed feel in the arches as they track the road in a beautifully supple way.  Arguably comfort levels have also been improved by the creation of a quieter cabin, however the engine felt rather muted as a result and even twisting the Manettino up through the levels didn’t make any appreciable difference. It sounded a little as though you were hearing the big V12 on a radio in another room. The only option is to drop the double-glazed windows and find a tunnel, at which point the V12 reveals itself to be as spine-tingling as you’d hope with a wonderfully sharp yowl at the top end.

As you push the pace the GTC4Lusso shows incredible traction. Through anything other than tight first gear corners the big Ferrari simply grips and grips when you get on the throttle. Perhaps the ability of the 4RM-S is slightly flattered by the rather torque-lite feel of the engine lower down in the rev range, because you do feel like you need to stay on top of the gears to get the sort of urge nearly 700bhp would suggest. 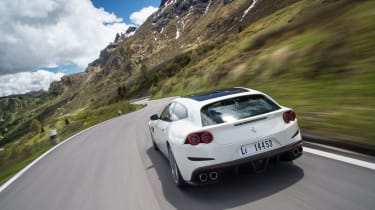 Turn the ESP off and you can undoubtedly get the GTC4Lusso to move around. You need a heavy right foot and in the dry any slides are quickly and neatly stabilised, but they feel good. In the wet you can find yourself with some big angles if you are aggressive with the throttle, the front axle not always coming to the rescue quite as quickly as you expect.

Despite this talk of oversteer, the GTC4Lusso is not a nuanced minutely adjustable sportscar like the best Ferraris. You can certainly cover ground quickly and it feels remarkably agile, but with the extra motion that a 1920kg kerb weight brings and a lack of feel from the front end there’s a slight sense of remoteness about the driving experience that ultimately tempers your enthusiasm on a good road. 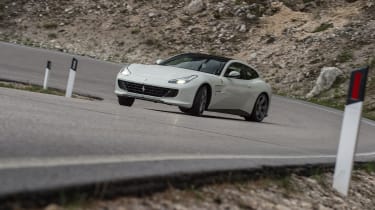 Of course many would say that’s not what the GTC4Lusso is about, with long journeys and more prosaic roads its natural habit. And that’s fine, it’s certainly very good at that. But I think there is a dynamic expectation of anything with a Ferrari badge, and the increased agility of the rear-wheel steer encourages you to push on and scrutinise the car’s ability at the limit. The fact that it doesn’t feel quite as good as you hoped when you get there perhaps isn’t surprising, but there’s still a shred of disappointment. Compared to other Ferraris, GTC4Lusso is more impressive than involving.

The standard list price of the new GTC4Lusso is £230,430. This of course includes Ferrari’s four-year warranty and the seven-year maintenance package. In terms of rivals, the Bentley Continental GT Speed would be up there as an obvious alternative. Despite the extra doors, the Aston Martin Rapide S is also sufficiently sleek to be considered and it’s very good to drive. Finally, the Mercedes-AMG S65 coupe is thunderously fast and comfortable. All are considerably cheaper than the Ferrari, but could certainly be optioned-up to try to get closer in price! 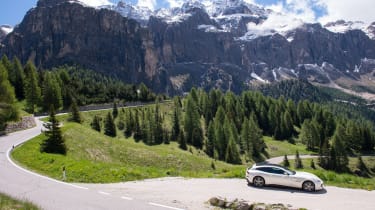 The optional panoramic glass roof gives the interior a wonderfully airy feel, particularly for rear seat passengers. It’s like the opposite of a glass-bottom boat, allowing you to gaze up at the mountains or skyscrapers. It’s also technologically advanced, with the Low-E glass reflecting solar rays when it’s hot outside to keep the interior cool. However, when it’s cold outside the glass reflects the heat inside the car to keep the cabin warmer. This also helps reduce the stress on the air-conditioning system (which itself has been improved to be quieter and deliver the required temperature 25 per cent faster).

Impressively agile and the new infotainment system is a big improvement, but the slightly muted noise and lack of feel means it’s not quite as alive as some might expect a Ferrari to be. 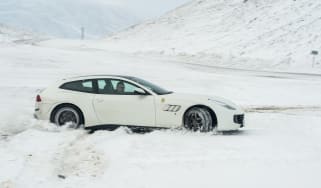 Modena’s new V8-engined grand tourer offers all the thrills of the V12. If only it sounded a bit more special…
Visit/ferrari/gtc4lusso/20232/ferrari-gtc4-lusso-t-by-novitec-a-700bhp-four-seater 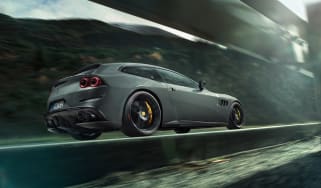 Want a near 700bhp four-seater GT? Novitec can organise that for you
Skip to HeaderSkip to Content