Want a near 700bhp four-seater GT? Novitec can organise that for you 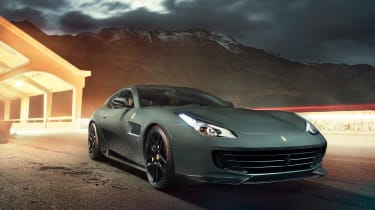 The Ferrari GTC4 Lusso T is meant to be the entry level four-seater GTC remember? Despite a four-cylinder deficit, the Lusso T is already breathing down the neck of its V12 GTC4 Lusso sibling in outright performance terms, so it is hardly surprising to hear that it has taken tuning company Novitec no time at all to substantially lift all the right numbers.

As a reminder, the Ferrari GTC4 Lusso T features the same twin-turbo V8 engine as the 488 GTB, producing 603bhp and 561lb ft of torque. This is a substantial 77bhp less than the V12, but crucially torque is up 56lb ft thanks to those turbochargers. This gives the rear-drive Lusso T a 0-62mph time of 3.5sec, only a tenth down on the V12.

Novitec has since turned the tables, adding an extra dollop of power and torque to the GTC4 Lusso T, finishing at 699bhp and 650lb ft, huge numbers regardless of the badge on the bonnet. As a result the Novitec GTC4 Lusso T will hit 62mph in just 3.2sec, staggering for what is considered an entry level model. 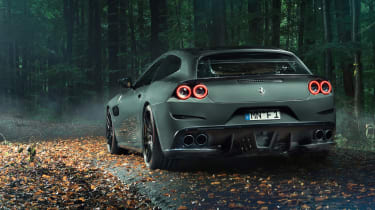 The other consideration is that along with the loss of four cylinders, the Lusso T also does without Ferrari’s clever all-wheel drive system, which feeds the front wheels via a secondary transmission, usefully lowering the V8's kerb weight.

Aesthetically, Novitec has applied its usual subtle styling treatments, adding a subtle array of aerodynamic additions to the nose aiding front-end lift, while at the rear the standard GT4C’s diffuser and top mounted wing have been subtly re-shaped.

As Ferrari’s only model to offer two engine options, it is becoming increasingly clear that Ferrari’s brilliant twin-turbo V8 engine might just be at the beginning of its potential.