evo is first to sample the petrol-electric Fisker Karma on European roads - is this the future of the car? 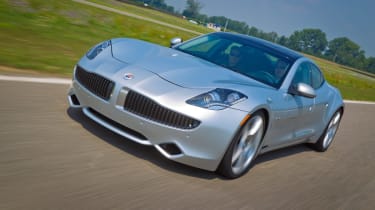 A new car from an equally new company. The Fisker Karma is a 'range extended' petrol-electric saloon that's just about to go on sale barely three years since the company - led by Aston Martin's former design boss Henrik Fisker - began work on the project.

The Karma is the first of a series of petrol-electric models that Fisker reckons will turn it into a major global manufacturer, with the stated aim of producing up to 100,000 cars within five years. For most start-ups, that would sound like complete hyperbole - but the Californian company is adamant that it has the funding to realise the ambition, from a combination of US government loans and private investors.

At nearly five metres from tip to tail the Karma is almost the same length as a Mercedes S-Class, although its striking design and low roofline means its closer in spirit to 'coupe saloons' like the Aston Martin Rapide. Inside it's a strict four seater, with the backbone that houses the battery running down the length of the car. Construction is from aluminium, reinforced by a limited amount of ultra high-strength steel, with the 2539kg kerbweight including around 300kg of batteries.

Fisker has no plans to produce a right-hand drive version of the Karma and the company acknowledges the car will have limited appeal in the UK. Despite that, it will be sold and supported by a small number of dealers. Prices haven't been finalised, but the Karma's $95,900 price in its US homeland suggests that early adopters in the UK will have to pay more than £80,000 for one.

Where to start? The Karma uses two rear-mounted 150kW electric motors which drive the back wheels through a shared limited-slip differential. That translates into a combined power output of 403bhp, accompanied by 918lb ft of torque, available from rest.

The twin motors are supplied with current by either a 20 kw/h battery pack (which is incorporated into the central 'backbone' of the car) or by a 2.0-litre turbocharged petrol engine turning a DC generator. The crucial difference between the Karma and a conventional hybrid is that there's no physical connection between the engine and the driven wheels, with all energy being transferred electrically in what Fisker calls 'series hybrid' configuration.

As with an electric car like the Nissan Leaf, the Karma's battery pack can be recharged by plugging it into a power supply. And, as with a hybrid, the generator is also used to top-up the battery while driving. The result is that in its pure electric 'Stealth' mode the Karma has a range of around 50 miles, with the 36 litre fuel tank adding another 250 miles in petrol-electric 'Sport' mode. The electrical motors are also used to provide regenerative braking when the car slows down, with charge fed back to the batteries - at higher speeds retardation of up to 0.25G is handled entirely electrically.

The powertrain enables the Karma to claim a set of apparently contradictory figures, with 0-60mph taking just 5.9-seconds in 'Sport' mode and with a (limited) top speed of 125mph, while boasting official economy figures - helped by the ability to remotely charge the battery pack - of 118bhp and CO2 emissions of 83g/km.

Strangely normal. For those on the outside the Karma looks (and sounds) like an otherworldly creature thanks to its stunning proportions and the synthesised noise it makes when running in pure electric 'Stealth' mode - imagine a Star Wars TIE fighter in limp-home mode. But from the driver's seat it drives like you'd expect a big exec to.

Fisker has spent a considerable part of its vast development budget on making sure the Karma ticks all the dynamic boxes that anyone coming to it from a similarly-priced conventional car would expect. It rides exceptionally well despite standard 22-inch wheels and the cabin is extremely well insulated at cruising speeds. Steering is light but accurate and - despite ultimate understeer - the car feels agile and responsive at normal speeds, especially considering its two and a half tone of mass.

Selection between 'Stealth' and 'Sport' modes is done manually, using what initially looks like a gearchange paddle behind the left side of the steering wheel. In 'Sport' mode the petrol engine fires up and supplies current to the rear wheels, the motor accelerating in response to the throttle pedal. Under normal use the engine stays impressively subdued, but requests for big acceleration - the sort that would get an automatic kicking down to its lowest available ratio - result in it accelerating to peak revs, resulting in a noise out of keeping with the character of the car.

In pure electric 'Stealth' mode the car is almost silent inside the cabin, and although acceleration is slightly blunted, it feels as rapid from behind the wheel. Stealth mode can be selected at any speed below 95mph and - unlike conventional hybrid rivals which limit the speed at which they will operate in full-electric mode - it's possible to cruise rapidly on AC power alone. Braking is particularly impressive, with the system blending electric retardation with the effort of the Brembo discs and calipers completely seamlessly.

The cabin is well extremely well finished with all the sort of toys you'd expect to find in a car trying to gain entry to this class, with most secondary functions handled by a touch sensitive screen in the middle of the dashboard. The eco message is subdued, with recycled wood used in the trim and the option - for Hollywood vegans - of an 'animal free' interior without any leather.

At the moment the Karma is the only fish in its pond, with its drivetrain making it effectively unique. The Porsche Panamera S Hybrid carries a similar pricetag and offers a sharper driving experience, but the Karma is certain to appeal more to those keen to emphasise their green credentials to the world.

Fisker has already confirmed that its forthcoming smaller model, the Nina, will be offered with right-hand drive and through a full UK dealer network.

The Karma's drivetrain is a development of one made for military use by US special forces. The 'Agressor' concept was designed to use a conventional engine to travel to and from operations and a silent electric mode while behind enemy lines.