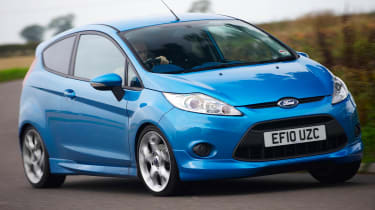 Paul Lang has abandoned his Fiesta in favour of something larger and a little more family-friendly (find out what next month), so I’ve taken pity on it and adopted it. I’ve some fun stuff planned for it, too, in the hope it can match the amusement levels of one of its ancestors – the Ford Puma. The Puma is a car I’m very fond of, having owned a 1.7 version until very recently, and on paper the Zetec-engined pair are incredibly similar, with almost identical kerb weights and close power figures (123bhp for the Puma, 118 for the Fiesta).

On first impressions, the Fiesta’s fun-factor isn’t too far adrift of the Puma’s, either. While ultimately not as agile (and without the coupe’s feelsome hydraulic steering), it still possesses Ford’s nailed ride and handling balance. My Puma felt far friskier than the Fiesta, though, but our impending 138bhp Mountune upgrade should help see to that.