A spectacularly good small hot hatch – just like the ST 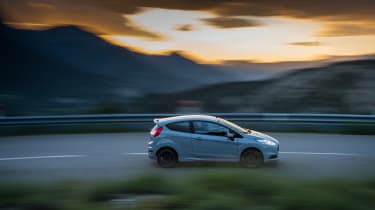 The Ford Fiesta ST200 is a faster, more powerful version of our favourite small hot hatch. Limited to 400 units – unless there is demand for more – the ST200 gets a unique Storm Grey paint scheme and a raft of minor mechanical revisions over the standard model.

As denoted by the ST200 badging this new model gets a power hike, the 1.6-litre turbo unit now returning, on paper, 200bhp. Officially, the standard Fiesta ST develops 178bhp, but in reality it has always developed closer to 200bhp – albeit on overboost, which is why Ford chooses the list the lower figure. 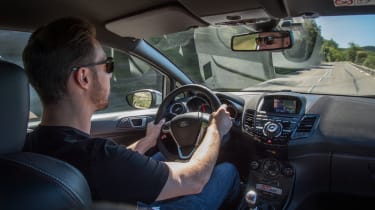 Drive is sent to the front wheels via a six-speed manual gearbox and an open differential. The gear ratios and final drive have been shortened by around 15 per cent on this model to give punchier acceleration, which helps to drop the 0-62mph figure to 6.7 second, down from 6.9. The top speed creeps up to 143mph from 139mph.

The chassis has been tweaked with slightly softer springs and dampers all round and a stiffer rear torsion beam and front anti-roll bar - both by 33 per cent - in an effort to improve both ride quality and handling precision. Those upgrades were quietly rolled out on all Fiesta STs at the end of last summer, however, so they're not unique to the ST200.

The tyres are Bridgestone Potenzas, mounted on 17-inch wheels with an ST200-specific colour scheme. Aside from the Storm Grey paint, ST200 badging, grey accents on the seatbelts and unique seat trim, then, the differences between this and the Fiesta ST are few and far between.

Almost exactly like the Fiesta ST we know and love, which is a very good thing indeed. You’d need to drive this model back-to-back with an earlier version to notice those chassis teaks – in isolation the two cars behave in much the same way.

The first impressions from the international launch in the south of France were very positive indeed and, encouragingly, we now know the ST200 wasn’t simply being flattered by the smooth roads of the test route. On our much bumpier network it is every bit as impressive.

At low speeds the chassis does feel very tautly sprung on rougher surfaces, but with speed the ride does settle markedly. It should be noted that the seat is set a little too high and the steering wheel is only just within comfortable reach, but the seats themselves are supportive with firmly stuffed bolsters that wrap around your torso. 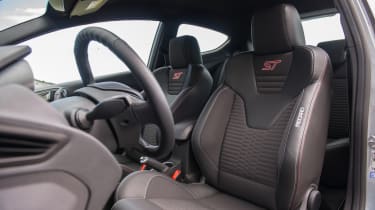 The interior quality is par-for-the-course for a typical small hatchback, but considering this car’s £22,745 price tag the materials and dash architecture do seem cheap, and the Sony infotainment system is still fiddly and frustrating to use.

All of that can be forgiven for the way the car drives, however. It’s just such a cohesive, expertly judged machine to drive on a twisty road, bumpy or smooth. The ST200’s dynamics are as polished as those of the very best sports cars at any price, but it backs up that impressive technical ability with an effervescent, addictive character.

The chassis is characterised by its neutrality and the way it leans in cornering; to call it roll would be misleading. Pitch the car into a medium speed or fast bend and it snaps sharply into the corner without a trace of understeer, then leans onto its outside wheels in a very tautly controlled way.

What really demonstrates the quality of this chassis is the way it breathes with an angry road surface, soaking up big bumps and landing softly into depressions. This being a small car with a short wheelbase you do certainly feel those bumps and potholes, but the crucial point is that the car isn’t unduly deflected or upset by them, instead maintaining a steady course.

That sharp front end gives the car huge pace down a road and that propensity to lean somehow makes you feel as though you’re travelling at far greater speeds than you really are. The car is really well supported at its outside rear corner, too, which works the rear tyres hard and keeps the front axle on a tight line. It all means the ST200 flows down the road beautifully, with enormous precision and control, all the while placing the driver front and centre. 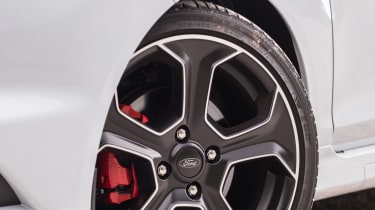 This is a stupendously fun car to drive, one that goads you into committing ever harder. Only in the very tightest corners does the front end begin to wash out. The steering, meanwhile, is direct and precise with a very natural rate of response from the front end. There are six-figure sports cars that don’t marry steering response, grip and body control as cohesively as this.

The drivetrain is the weak point, because although the gearshift is brilliantly mechanical the engine itself is short on thrills. There’s plenty of power – without any torque steer, incidentally – and low down response is good, but the engine always sounds coarse and there are no real fireworks as you approach the redline.

Rather like the chassis tweaks it’s difficult to identify the ST200’s shorter gear ratios in terms of straight-line acceleration – you’d need to drive it back-to-back with an ST – and there are actually occasions where the shorter gearing forces you to shift up between corners rather than being able to hold the lower gear.

Just like the Fiesta ST the ST200 is a class-leading small hot hatch, but the Peugeot 208 GTi by Peugeot Sport does offer a similarly entertaining driving experience, albeit without the same touch of class.

This car’s biggest threat, though, is the factory-approved Mountune upgrade. For £599 the Mountune car matches the ST200’s power outputs – all the time, in fact, without an overboost function – and even a range-topping ST-3 would be almost £2500 cheaper with the upgrade than this ST200. What price exclusivity? 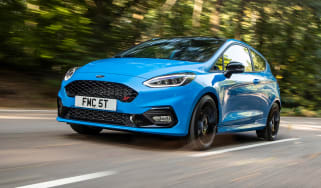