The Ford Puma is a performance bargain, with a sweet chassis and great choice of engines 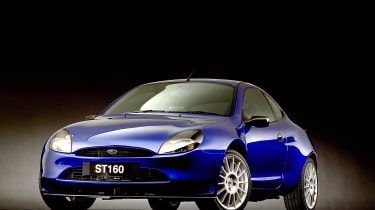 There’s rarely been a better time to be a driving enthusiast. Not only are modern performance cars blisteringly quick and incredibly well engineered, but the choice of genuinely great, fun used cars has never been better.

Even if you’ve got barely a grand to scrape together, one of the best is the Ford Puma. Launched in 1997, the Fiesta-based coupe broadened Ford’s range of impressive drivers’ cars and made all its compact coupe rivals feel just a bit under-developed, and in an era where small, inexpensive cars have grown in size and adopted sensible three-cylinder engines, its compact footprint and revvy four-pot engine are even more appealing. 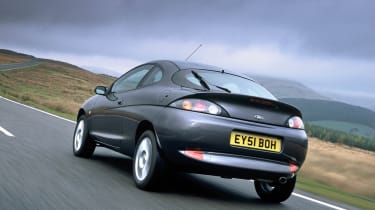 Now though, the Puma badge has reappeared on a compact SUV, but rather than extrapolate on yet another dull SUV, this is our review of the Ford Puma everyone actually wants.

While a propensity to rust has claimed Pumas in huge numbers and renders many of those left rolling restorations, they’re still plentiful and an inexpensive introduction to the thrill of driving.

Turning a humble supermini into a sporty coupe could have gone so wrong for Ford, but the Puma was executed superbly. For a start, the fourth-generation Fiesta, which made its debut in 1995 and donated its underpinnings to the Puma, was a tidy handler in its own right. And secondly, Ford lavished as much attention on improving the basic package as it did on the styling.

The layout was pure Fiesta, with struts up front and semi-independent trailing arms at the rear, but Ford worked hard to reduce friction in the suspension components, while increasing spring rates, using a thicker anti-roll bar and fitting a set of 15-inch alloy wheels wrapped in 195/50 R15 tyres. The power-assisted steering reduced assistance as speeds increased too.

Thanks to a new engine, those speeds would increase faster than in any contemporary Fiesta. Yamaha helped develop the 1.7-litre Zetec SE four-cylinder, giving it variable camshaft timing and low-friction liners. Outputs of 123bhp and 116lb ft sound low today, but in 1997 and in a 1041kg shell it was enough for a 9.2-second 0-60mph time and 126mph top speed. A five-speed manual gearbox - one of the slickest around - was the only transmission option available, and the whole lot was priced at £14,550. 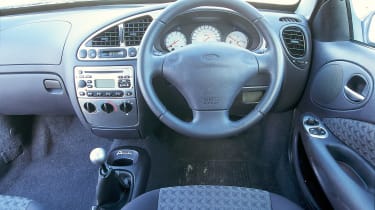 Ford soon offered a 1.4-litre engine too, giving Puma buyers a cheaper (and cheaper to insure) option without suffering any change to the Puma’s striking visuals. But it was 1999’s Ford Racing Puma that really whet drivers’ appetites: based on the ST150 concept, Tickford was drafted in to graft on a set of wide arches, add 70mm and 90mm of extra front and rear track, 17-inch Speedline alloy wheels, new bumpers, and larger brakes with Alcon calipers.

Inside the standard Fiesta-turned-Puma interior gained blue Alcantara trim on several surfaces, including those of the new Sparco bucket seats. Power might only have climbed to 153bhp, but the handling had gone from neat to nasty (in a good way), with huge grip and razor sharpness to every control.

The Racing Puma never sold particularly well owing to its high price (£22,750 in 1999, which was in Lotus Elise territory), and production lasted little more than a year. Late in 2000 the Puma gained the smallest of facelifts (later Pumas tend to be distinguished by nine-spoke alloys rather than the earlier “propellers”, and a third brakelight in the tailgate) while the entry 1.4 made way for a 1.6 from the Fiesta Zetec S.

‘You know where you are with the little coupe right away. There’s an appealing directness to every aspect of the Puma’s dynamics that instills confidence, and nothing it does shakes that. Like the Proton [GTI], it remains faithfully neutral even at the very limit, and its steering is just as meaty and quicker witted.

‘Its only flaw is a lack of outright wheel travel, though all four of our contenders felt a little uncomfortable over the viciously undulating Lincolnshire Fen roads that formed part of our test route.’

‘Ford was on a dynamic roll when it made the Puma, having already given us the Ka, Fiesta, Focus and Mondeo. They were all fine handling cars, but the Puma topped the lot. Technically, there’s little special about it, but the detailing is excellent: the taut yet supple damping, the slack-free steering, the snappy, accurate gearshift. The Puma instantly feels right, and proves wonderfully direct and agile, yet despite the brightness of its turn-in, the tail never really threatened to break away.

‘A car to make every driver feel skillful, observes Simister. It feels utterly foolproof and confidence inspiring, so you can go quickly in it straight away’. 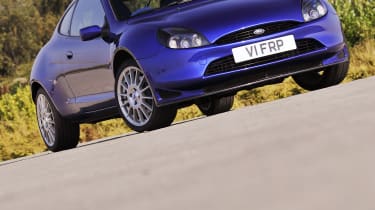 ‘No two designs of bucket seat seem to grab your body in the same way the Sparco ones in the FRP go for the hips. Alcantara adds to the interior's intent, particularly the rich blue cloth on the little steering wheel. With a hike of just 30bhp, this is no Focus RS approach to creating a fast Ford, but while its outright pace might not make the racing Puma memorable, its handling certainly does.’

‘The nose reacts Elsie-like to the slightest twitch of the wheel, darting around in even in a straight line on the bumpy Sussex roads. In the corners the front feels so stiff and remains so fla that there’s almost zero progression in the wet. It feels like the car is trying to pivot around the blue oval on its grille and grip becomes understeer becomes lift-off oversteer in rapid succession. Happily, with such instinctive steering it’s easily catchable, but it leaves you in no doubt that this Puma was designed with a circuit in mind. It’s massively desirable and I love Ford for producing it, but the standard car is actually better for road use.’

‘Just like the standard car, the Ford Racing Puma feels utterly together, the chassis always remaining smooth and unflustered, the engine razor-sharp and the power perfectly metered. The handling is deliciously fluid and malleable, allowing you so many options on the way in, through and out of the corner that you can always adjust the attitude of the car to suit the circumstances.

‘But it’s the pace, the sheer, dizzying unquenchable pace of the thing that leaves you breathless with excitement. Naturally, with a still-modest 153bhp, the Puma isn’t blisteringly accelerative, but there’s so much workable, enjoyable grip and such entertaining handling that even if you had 453bhp the straights would still be the boring bits.’