The spririt of TVR is alive in Ginetta's new Cayman-rivaling G60, with its 310bhp V6 and no driver aids. Review here 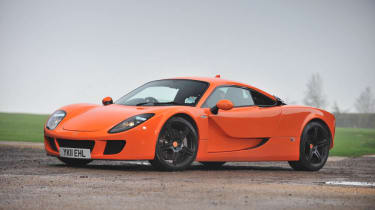 Now there’s a question. We’ve known this car since 2003, when it was the Farboud GTS. A handsome, carbonfibre-bodied, junior-league supercar, it didn’t get beyond the driveable prototype stage and was subsequently taken on by Chris Marsh. He renamed it the Farbio GTS, re-worked it with a Ford V6 and seemed set to make a go of it. The couple of versions we tried drove well, and there were plenty of orders, apparently, but only a handful were sold. Now the Farbio has become the Ginetta G60, the car you see here.

When Ginetta took on the project in early 2010, its engineers thought they would just be giving the Farbio GTS the final push to get it into small-volume production, but the more they looked, the more work they found. The upshot is that they have replaced the 262bhp 3-litre Ford V6 with a 310bhp 3.7-litre Ford ‘Cyclone’ V6 (used in the nose of Ginetta’s G55 racer), re-wired the car and replaced all of the suspension. They have also deleted the power steering and power brakes to make the G60 more of a drivers’ car and less of a tourer.

The interior is carried over largely intact, so there is a mix of glossy carbonfibre and carbonfibre-look material, a small instrument pod and a neat touchscreen that takes care of most other functions and reduces the switch count dramatically.

An output of 310bhp and a kerb weight of just 1080kg leads to a certain level of expectation, and the Ginetta doesn’t disappoint. The naturally aspirated engine picks up cleanly and solidly, snapping the car forward, and there’s a thrilling escalation to the delivery.

The V6 idles with a classic, gruff note, the short-throw gearlever slots positively into gear and you roll away wondering if the steering will feel as meaty as the steering wheel looks. In fact, it is surprisingly manageable as soon as the car is rolling. You forget the lack of assistance until you need to turn more than a handful of degrees. Then the sudden ramp-up in effort is a little disconcerting. You adapt to it, but at the end of a decent drive you can feel the exertion across you shoulder blades. Less of a concern is the lack of power assistance for the brakes, which you adapt to and cope with more easily.

The G60's ride is firm and reacts sharply to ridges and bumps. The car is solid enough but feels jiggly and unabsorbent down a typical B-road. Grip and traction are high and mid-corner the G60 feels composed and precise, but beneath the steering weight there’s a slight reluctance on turn in, and you’re wary of pushing the rear in case you need to find opposite lock in a hurry. There’s a lack of straight-line stability, too, which suggests it has been developed more on track than on road.

Similarly priced or similarly powered cars offer much more polished packages than the G60. A Porsche Cayman or 911, Lotus Evora or Nissan GT-R are more lavishly trimmed and offer a more accomplished combination of road and track ability. None have the bespoke and limited-run appeal of the Yorkshire built Ginetta though.

Ginetta has made this attractive car a much more convincing proposition by installing the 310bhp V6 – the performance now matches the looks. However, the lack of ride suppleness in particular gives the impression that the G60 is not quite the finished item, not quite as polished as it should be. It’s still tantalisingly close to being the car it always promised to be.