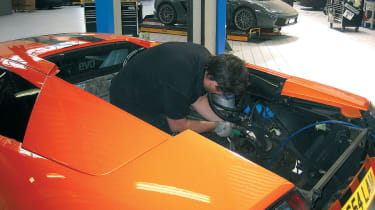 Sant’Agata is just 45 minutes’ drive from Bologna, and with the help of all the cheap flights you can get these days I’ve already managed to squeeze in a couple of visits to see how SG54 is coming along.

It’s a bit like going to see a favourite aunt in hospital. You have mixed feelings about going, as you don’t want to see them laid up, but you feel you really must go. Then once you’re there you end up getting distracted by all the other patients on the ward, and when those patients include Miura SVs, Diablo GTs and the odd Countach QV it’s very hard to concentrate on the loved one you’ve come to visit…

Anyway, about ten days after the Murciélago arrived in Italy I received a very detailed email from Automobili Lamborghini workshop manager Claudio Tommasini on the exact cost of putting my car back into tip-top health. Worryingly, at first glance the price wasn’t that much different from what had been quoted back here in the UK – about 14 grand. After checking the limits on my credit cards and seeing how much equity was left in the house, I took a closer look at the estimate and discovered that it included not just a new crankshaft and a bottom-end rebuild, but also new timing chain guides and bushes, fresh brake hoses, a major service and two pages of additional parts, including a new rear spoiler motor (the original has jammed) and a replacement gel-filled battery (£400 – ouch!).

As had been previously agreed, there was also a £5000 contribution from Lamborghini towards the rebuild, although it was made clear that this work wouldn’t have been necessary had it not been for the constant hard track use that this Lambo has had to put up with. Can’t argue with that. In fact I was told that the only other time the factory knew about a pulley shearing off the end of a crankshaft (the cause of my car’s problems) was on a Murciélago R-GT that had competed at Le Mans. Nuff said.

Still, at least the work should give SG54 another 50,000 miles of life – pretty much vital given that this Lambo will still continue to work for a living. It should be ready for its trip back to the UK fairly soon, thankfully under its own steam this time, and with a bit of luck it will be accompanied by a new friend it’s acquiring. The picture here may give you a clue as to what that is. More details next month…