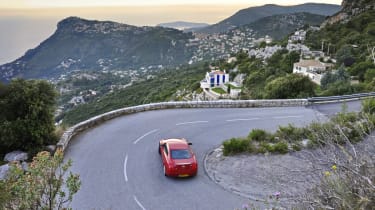 There’s no logical reason to drive to the south of France. It’s significantly cheaper to fly, and there are plenty of perfectly good hire cars available at Nice airport. But there is something about doing it the hard way, actually being properly involved in the process of getting from A to B rather than spending hours twiddling your thumbs in stale airports and on stuffy aeroplanes. Driving gives you a proper feeling of distance, and even if you’re making the journey in a modern car on modern autoroutes, there’s a sense of old-fashioned adventure about it. So with a week on the Côte d’Azur planned, my wife and I decided we’d travel by Infiniti.

After an early ferry crossing, the cruise control was set to fine-avoiding speeds, putting the engine at a barely audible 2500rpm or so, and progress was truly effortless. Even swapping drivers was a doddle, thanks to the two memory settings for the driver’s seat and steering wheel. As the miles slipped by, the only flies that landed in the ointment were the spurious traffic info being picked up by the satnav and the lack of height adjustment for the driver’s seatbelt, which bugged Mrs Ev until we found a makeshift solution.

The 750 miles from Calais to Cannes took less than 12 hours, and we arrived feeling… well, about as fresh as you could expect after a 5.30am start. Costs amounted to £84 in tolls and, at an average of 31mpg, £150 in fuel. Perhaps that’s another reason to make a journey like this by car now – if fuel prices rise much further, it won’t even be worth contemplating.

All things considered, the Infiniti earned its country-crossing GT badge with ease, and over the week that followed it was infinitely more enjoyable than a bog-basic rental Twingo would have been. It attracted glances while cruising la Croisette in Cannes (perhaps people were tired of looking at the 599 GTOs and Veyrons), its torquey V6 and auto gearbox made light work of climbing the spectacular Route des Crêtes, and the quick steering was just the thing for enjoying the endless turns of the Route Napoleon. And could there be a more fitting machine in which to clip the red and white kerbing in Monaco than one from the manufacturer whose name is on the car that won the Grand Prix there earlier this year?

After racking up 2250 miles in just eight days, the G37S had proved itself to be a consummate all-rounder, which was exactly what we needed. My respect for this car continues to grow.