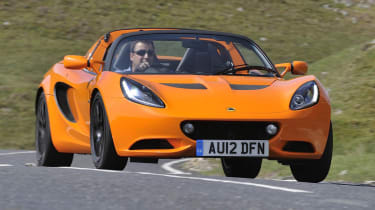 What is it? The Lotus Elise S. The ‘S’ designation now only applies to supercharged models in the Lotus range, and this Elise comes with a suitably blown 1.8-litre engine. It costs from £36,200 – a seven grand premium over a standard 1.6 Elise. Technical highlights? The supercharged engine – a Toyota-sourced four-cylinder, as we’re used to with modern-day Elises – produces 1bhp less but 28lb ft more than the unit in the previous-generation Elise SC, while consuming just 37.5mpg and emitting only 175g/km of CO2 on the combined cycle. While still a reasonably hardcore proposition, the Elise isn’t as basic as it once was; our test car was specced past £42,000 thanks to the fitment of cruise control, air-con, an iPod connection and Bilstein sports dampers, among other things. A paddle-shift automated manual gearbox is on the options list, too. What’s it like to drive? Very, very good. The regular 1.6 Elise is already sweet, and this new S turns the wick right up. Whereas you need to wring out the 1.6’s revs to maintain momentum, the 1.8 S’s supercharger – and the resulting peak torque at 4800rpm – ensures progress is very easy indeed. You’re still rewarded for fully extending the engine, too; its note is typically waspish, especially with the roof deconstructed and popped in the boot. And you’ll find it hard not to drive the wheels off it; grip from the Yokohama Advan tyres is absurdly abundant at times, and you’ll have to really provoke the Elise to break traction. The non-assisted steering is as communicative as ever, the standard six-speed manual gearbox lovely and slick and the brakes powerful but progressive to use. As with all the Elises that have gone before it, its balance is superb, and after a couple of miles your confidence will be sky high. The downside to all this fun concerns, as you might expect, refinement. It won’t be too long behind the wheel before you’re uncomfortable, and plugging in your iPod is no use if you can’t hear it playing at 70mph. They’re pretty small trade-offs for a car so dynamically talented, though. How does it compare? At 36 grand – or a fair chunk more if you tick a couple of options (air-con alone is £1100) – the Elise is up against all manner of opponents. A 261bhp Porsche Boxster is similar money, but is a more grown-up proposition, while at the other end of the scale, Caterham’s banzai R500 Superlight, with 263bhp and a 2.8sec 0-60mph time, is £41,000. Anything else I need to know? Perhaps the Elise’s toughest foe is an enemy from within – the absolutely brilliant new Exige S costs £50,850, its 345bhp supercharged V6 ensuring it’s a genuine supercar troubler. Read our full verdict in issue 171 of evo, out now.