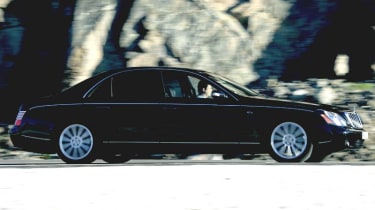 I know what you're thinking: what's the point? The same thought was troubling me on the privately-owned Airbus A319 (replete with leather sofas, polished wood veneer tables and silver fruit bowls) that Maybach had kindly chartered to fly us to Marbella for the launch of the 57S. What is the point in building a super high- performance Maybach - a car with a big-bore, AMG-tweaked, hand-built V12 engine, lower and stiffer suspension, specially made lightweight 20in alloy wheels and bespoke Michelin tyres - when it's likely that the person who's paid for it is reclined in the back watching a film and quaffing champagne? It's a thought that continues to bother me as we emerge from the back of the Maybach 62 (one of six £330,000 'maxicabs' on hand at the launch) that has shuttled us silently and at massive speed from the airport to the Marbella Club. It's still nagging as we approach the line-up of eight identical Vesuvius Black 57Ss, take a set of keys, and head for the legendary Marbella to Ronda mountain road. It's a fearsome test of any car, let alone one that weighs 2.7 tons and is longer than most people's living rooms. And yet, when you squeeze the long-travel, lightly weighted throttle pedal into the carpet the 57S annihilates the incline with its locomotive-like torque, that mighty 737lb ft peak arriving at little more than tickover and staying there, doggedly, to 4000rpm. Such a resolute bear-hug of accelerative g sloshes the fluid to the back of your skull and presses your stomach into your spine. It's an impressive but decidedly nauseating sensation, and as stern a test of your constitution as you're ever likely to meet, short of a parabolic flight in the Russian Space Agency's 'Vomit Comet'. Bruisingly effective in a straight line, the 57S also does a pretty admirable job through the corners. Sure, it's no supersized M5, but drive it intelligently and it feels surprisingly tidy and carries genuine point-to-point pace. The key is gauging your turn-in speed, for any excess speed, or simply an overly sharp initial steering input, manifests itself as stubborn understeer that takes all the stability control's wit and cunning to rein in. However, be less greedy on the approach and the 57S can be balanced beautifully on the throttle, nudging between sweet neutrality and, if you disable the DSC, a sweeter tail-led stance. It's a miraculous achievement in such a vast car. Perhaps more surprising given the car's chauffeur-driven super-luxury focus, is that it takes serious effort to drive the Maybach smoothly. Not unexpectedly, the steering has plenty of assistance, but there's not a great deal of feel until the car's loaded-up laterally, which makes it all too easy to turn in too sharply and take corners in a series of bites. The brakes are similarly afflicted, with a dearth of feel for the first part of the pedal's travel. This wouldn't be so bad were it not for the abundant stopping power on tap when you squeeze the pedal a fraction harder. Far from flattering, the Maybach needs a deft hand to deliver swift, silken progress. Suffice to say I won't be giving up my day job to don a dark suit and peaked cap. Freed from the need to appease any back-seat business moguls, it's fun to hustle the 57S. I'm just beginning to get my head around its appeal, if not its point, when we arrive at our destination: the Ascari Race Resort. Yes, that's right, a racetrack in a Maybach. Perhaps inspired by our own Harry Metcalfe's legendary exploits in a Maybach 62 around the N