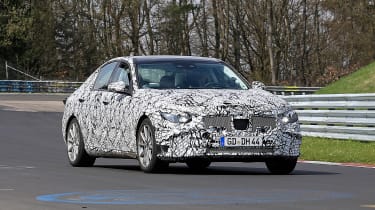 It only seems like yesterday that the updated Mercedes C-class arrived, but Mercedes has been spotted testing the next-generation model again, and it's due to arrive some time in 2020 with hot AMG models arriving a year or so later. The new C-class won’t differ markedly from the current car in concept, rather it will incorporate all the latest Mercedes infotainment tech and electrified powertrains, with a fresh look and uprated engines.

What we do know is that it’ll share similar underpinnings with the current model, built on the same MRA platform, and combine a similar layout of longitudinally mounted four- and six-cylinder engines with rear-wheel drive. All-wheel drive will be optional as now, and expect a wider integration of electrification in mild, parallel and plug-in hybrid models depending on the specification and market.

> Click here for our review of the latest Mercedes-AMG C63

Of most importance though, the new C-class will also accommodate AMG’s suite of performance engines, made up from both turbocharged straight-six and V8 units. As in AMG’s new ‘53’ AMG models, the straight-six will be turbocharged and its ancillaries powered from an electric motor rather than directly off the engine, while we expect the same brilliant M177 4-litre ‘hot-V’ V8 engine to top the range. There is an associated risk with fitting V8 engines in this type of car as the latest round of emissions regulations are due to tighten yet further, but this engine’s use across the AMG range, not to mention Aston Martin, has meant that Mercedes has invested heavily to ensure the engine is future-proofed, at least in the short term. 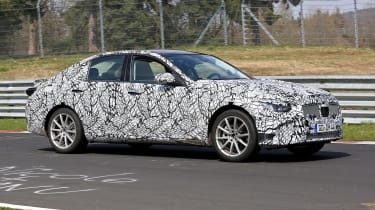 AMG’s recent trend of appropriating all-wheel drive to its models might also make it into the next round of AMG C-class models, especially if the rival BMW M3/M4 also adopt all-wheel drive, which is a distinct possibility.

Inside, we suspect the C-class will draw inspiration from the new A-class, with Merc’s now trademark dual-screen set-up sure to be combined with the latest MBUX interface and touchpads.

Though a few months have passed since we first saw the car testing, very little has changed in terms of camoflauge, making it difficult to see detail. From what we can see though, the model appears to have taken an evolutionary path, sharing similar proportions and window-line with the current car. Slimmer headlights will likely frame a large grille opening, while at the rear new lighting clusters will bleed into the boot lid, differing from today’s one-piece upright units.

As the current C-class was only released in 2014, we don’t expect the new model to be seen till 2021, at which point we should have a new BMW M3/M4, and new Alfa Romeo Giulia Quadrifoglio derivatives to act as solid rivals for the upcoming C-class we’re really interested in.