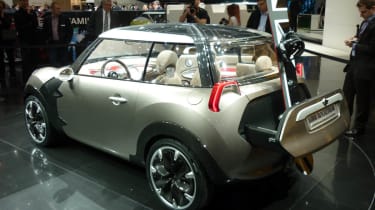 The Mini Rocketman, a 94mpg spiritual successor to the 1959 original, has been launched by BMW at the Geneva Motorshow. Measuring just over three metres in length and built around a carbonfibre chassis, it further suggests the New Mini family is likely to expand, with rumours suggesting a smaller model could make an appearance as soon as 2013.

The interior mimics the 3+1 seating pioneered by the Toyota iQ, with access aided by double-hinged doors. The boot is styled in a similar way to Issigonis’s original, with a drawer-style opening.

Future small Mini models are likely to be powered by a new range of BMW three cylinder petrol and diesel engines. Allied to these would be a series of efficiency measures to enable the car to achieve its impressive, hybrid-slaying predicted fuel consumption figure.  See the rest of evo’s 2011 Geneva motor show coverage