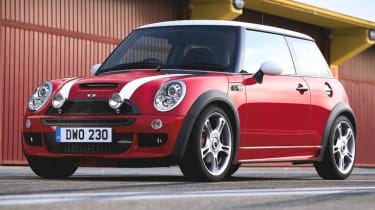 Unlike the current property market, the popularity of the MINI Cooper S shows few signs of slowing down. It's impossible to complete a journey without encountering a slotted, striped snout or two. And you'd be amazed how many conceal an engine breathed-on by the original MINI fettler, John Cooper Garages. Since the John Cooper Works power upgrade package was introduced 18 months, more than 7500 UK, European and US Cooper S owners have coughed-up sizeable sums to pump-up their beloved babies tantalisingly close to the magic 200bhp. Put another way, that's a collective spend of £18million, plus fitting. No wonder Mike Cooper's always smiling... Although pricey, the JCW Cooper S engine upgrade has always offered tangible performance gains and, crucially, a full factory warranty. It's an enviable combination of pace and peace of mind, bolstered, of course, by the kudos of that legendary name. Keen to capitalise on the enduring demand for the Super Cooper, a new S Works kit has been developed alongside the recent factory revisions to the Cooper S, which include a slight power hike and ratio changes in the six-speed 'box. The results amount to a big gain over the standard S's 170bhp, but only modest on-paper gains over the original JCW engine upgrade. Power's up from 197bhp to 210bhp, while torque is boosted from 177lb ft at 4000rpm to 181lb ft at 4500rpm. The gains have been achieved through changes to the air filter system, where an extra intake flap opens at higher revs (4500rpm onwards), together with new fuel injectors and a re-mapped engine management system. Not rocket science, then. I have to admit to questioning the sense of a four-hour commute from Northants to the outskirts of Worthing to experience the blood-curdling effects of those 13 extra horses and 4lb ft. But 10 minutes after swapping evo's trusty white 'mk1' S Works for the 'mk2' it's clear there's far more to this car than the spec-sheet reprint. Shame on me. You notice the engine improvements immediately. The throttle response is cleaner and more decisive, defying the slightly peakier nature of the torque figure by pulling harder earlier. The engine note is sweeter too: the supercharger's whine has less drone and more zing, and the engine is generally smoother. I don't believe the added keenness is down to the revised gearing either, for the revised Cooper S's legs still feel pretty lanky. In fact, taking the mk2 S Works to the limiter in second and third gear corresponds to an indicated 70mph and 90mph or so respectively, while a 4000rpm sixth-gear cruise equates to just over 90mph, just like evo's Fast Fleeter. Weird. Something's been done to the gearbox, though, for it has none of the cross-gate notchiness of our long-termer's shift quality. Ironically, despite trekking south to experience the engine, it's the chassis that springs a surprise, which is odd, as no-one said anything about suspension changes. Having driven to Worthing in 'my' S Works, I'm well dialled-in to its dynamics, sharp-edged damping, fidgety ride, poor wheel control and all. The demo car is fitted with the same 18in alloys and Dunlop run-flat tyres, but its suppleness and pliancy are a significant improvement without diminishing the roll-free stance and chewing gum grip. It feels at home, rather than uncomfortable, on the oversize 18s when pushed hard on scabby B-roads, and when drizzle coats the tarmac a strategic disarming of the DSC reveals that the new car resists second-gear wheelspin out of roundabouts and tight corners with greater tenacity. Back at John Cooper Garages I query the spec on the test car; it transpires that it's fitted with JCW Sports suspension. So that explains it. Priced between £800 and £900 depending on the precise make, model, wheel and tyre spec of your car, if you've already gone for the 18in JCW rims, or even stuck with the Minilite-style 17s, the suspension kit is excellent value. In fact, I reckon it should be standard on the Cooper S. Overall the new S Works is a fine car. Expensive once you start ticking the boxes (an S Works like the one I tested, with 18in rims, sports suspension, JCW leather seats and new carbon interior trim would set you back a mighty £28,000), but if the end result wasn't so complete, dependable and entertaining it wouldn't be so damned tempting.