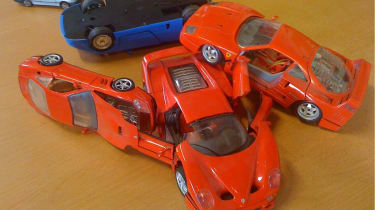 Following rumours on websites and forums that a member of the editorial staff was responsible for the Pagani crash in Scotland, evo would like to take this opportunity to whole-heartedly deny the allegations. We weren’t there, it wasn’t us, we don’t know who it was, it wasn’t Harry Metcalfe’s Zonda etc.

However, we are prepared to stand up and admit to being responsible for a multiple supercar smash that occurred today on the outskirts of Wollaston, evo’s home town. Three Ferraris and a Bugatti were damaged in a high speed collision that left one member of staff mildly upset and another nursing a bruised thumb.

The incident occurred when Harry Metcalfe attempted to slurp his coffee while controlling high speed oversteer in his Ferrari 550. The resulting tank-slapper, although familiar territory to Metcalfe now that he owns a TVR, saw him fishtail wildly towards an oncoming Ferrari F40. At the wheel was Editor Nick Trott who was momentarily distracted by yet another phone call at the very moment the twin turbos lit, lifting the nose so far the steering no longer had any effect.

This coincided with the rapid arrival on the scene of Dickie Meaden at the wheel of a Ferrari F50. Dickie, who tweeted about the accident before it even happened, buried the F50 into middle of the prancing horse pile up. Five seconds later, John Barker, helming a Bugatti EB110 in which he’d been chasing Dickie through the tricky sequence of corners from Pile-o-Magazines to Disused Printer, exited the final corner with a dab of oppo. The dab became a dose, became a hurl, but to no avail, as our Sultan of Sling thumped his Bugatti into the Ferrari foul-up, flipping over them and coming to rest on its roof.

Rumours that TV’s Spender was first to arrive on the scene in his Ford Sierra to Sort It Out proved well founded, although the conch-nosed crooner did little except hum some ditty about Crocodile Shoes.

NB: No toys were harmed in the making of this article. Not even the F50, which picked up its broken windscreen in an earlier incident.