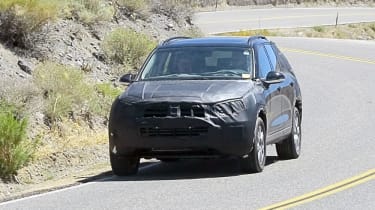 The 2011 Touareg will go on a crash diet and be up to 300 kilograms lighter than existing models. Along with its weight loss, the chassis has been lengthened by a few centimetres for a more roomy interior and an optional third row of seats, though we expect that third row will probably amount to jump seats that fold flat.

Styling-wise, the Touareg will be more sporty and less utilitarian this time around. The most significant changes will appear in the front fascia, grille, headlights, rear fascia and taillights. A moderate update to the interior is likely in store as well.

The Volkswagen SUV will continue to share a chassis with the next generation Audi Q7 and Porsche Cayenne. Powertrains should include updated versions of the 3.6-litre V6 and 4.2-litre V8 gasoline motors along with one or two turbo diesel offerings.

Watch for the new Touareg to start production sometime in the second half of 2010 as a 2011 model year vehicle.