Pagani has created the most powerful, most hardcore road-going version of its Zonda to date 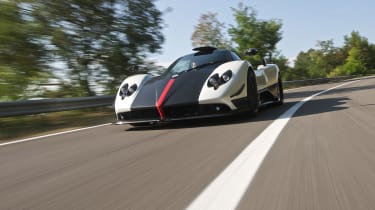 If all the lovely flickable toggles, anodised switches and tactile carbon controls, ‘traction control off’ was the last one I expected Simone (one of Pagani’s two test drivers) to suggest I press. In fact, as we snake our way up the warm Italian hillside, I clearly remember Harry telling me quite sternly not to touch the ASR rocker switch on the far side of the gearlever when I first drove his car a couple of years ago. And yet this is considerably more expensive than Harry’s C12S because this is a Zonda Cinque, and there are only five of them and each one costs a faintly knee-trembling 1.3million euros. Plus taxes.

The idea behind the Cinque (pronounced ‘chink-whey’, and meaning ‘five’ in Italian) came from Pagani’s dealer in Hong Kong, who said that his customers were clamouring for a road-going version of the Zonda R. The R, in case you need reminding, is the sort of trackday toy for which the owner probably sees no issue with simply hiring the entirety of Monza for the weekend, in the process paying off a small national F3 championship that had previously held a booking on it for those dates. Horacio Pagani was initially reluctant to do such a project, but I imagine his customers are persuasive people and eventually he caved in and said that he would build five. If he’d decided to build four I could be driving the first two-wheel-drive Quattro, or if he’d only built one it would have been the Zonda Uno, which could have made for a bizarre twin test.

As you can imagine, with such a small order run there aren’t many press demonstrators, so this is a customer car. One of the five. Pre-sold. No press launches this time, no column inches in the Western Evening Tribune to bolster sales. In fact evo is the only magazine to be allowed to drive one. I don’t know who the owner is, I don’t even know which number of the five this car is, but if you are reading this – thank you.

To be honest, I wasn’t entirely sure what Pagani would allow us to do with the car. A quick trip around the roads of the industrial estate outside Castelfranco would have been understandable, but that industrial estate is half an hour behind us now and we’re up in the hills overlooking Emilia-Romagna. The road is perhaps a little tighter than I would have chosen and it is certainly a lot bumpier and more uneven than I would have thought was good for a supercar, but it is nonetheless a fantastic place to be.

I quickly realise that although the road is buckled and broken in places, the Zonda is riding the bumps firmly but with utterly phenomenal damping. What makes this even more amazing is that the Cinque is more focused than a ‘standard’ C12 or F. On the way here through small towns and villages you could feel the drain covers and partially repaired roads more intimately. To be honest you could see when we walked up to the car outside the factory that it was belly-scrapingly lower, so much so that Pagani has seen fit to add a nose lifting system to the front suspension’s armoury. Yet although there appears to be suspension travel only fit for a track, the Cinque is more than coping with everything this Italian B-road is hurling at it. And with 669bhp and 575lb ft of torque it’s being hurled at speed.

Titanium springs with fully adjustable Öhlins dampers to Pagani’s specification are charged with dealing with the assault. The suspension is made from magnesium and titanium, while the forged monobloc wheels are aluminium and magnesium, all helping to pare back the weight – and particularly the unsprung weight – to an absolute minimum. The wonder-metal with the atomic number 22 and the highest strength-to-weight ratio of any known metal is also woven into the monocoque chassis. Carbo-titanium is something Pagani has been developing and it is arguably even more fascinating and bewitching to look at than normal carbonfibre, silvery strands running through the black fabric, one pinstripe to every warp or weft.

We park up at the side of the road to allow Roger Green to install his bullet cameras in the Zonda’s cockpit. Simone and I perch on a wall in the shade watching Rog grappling with wires and black boxes. It’s mostly the roof-mounted air intake that marks the Five out from a normal Zonda, but there are other little additions too, like the carbon snorkels above the rear wheels which direct air at the rear brakes. There is a new front splitter and a new rear diffuser as well, which, combined with the massive adjustable rear wing, apparently produce 750kg of downforce at 300kph (186mph). We might have to leave the 150mph-plus stuff for another day, though.

Eventually Rogero Verdi signals that everything’s ready, but as I get down off the wall Simone stays where he is. Shutting the lightweight door it feels wonderful to be in the car on my own without a chaperone (albeit a very relaxed and friendly one). The cockpit isn’t as light and airy as usual thanks to that intake on the roof replacing the usual glass panels, and you are entirely reliant on the antennae wing mirrors to see what’s trying to keep up. This particular car has a bare-carbon finish inside, with black aluminium where normally you’d expect silver. Very cool. The wheel is trimmed in Alcantara and the seats are carbon buckets made by Toora. There are four-point harnesses too, although they don’t work terribly well with the seats because the left belt keeps slipping down your shoulder so you have to keep hoiking it up like a mildly inebriated girl with an ill-fitting strappy top.

Turn the key to switch the ignition on, foot on the brake, then keep turning the key or press the red button on the transmission tunnel to spin the starter motor. Your next move then involves the one crucially different element about the Cinque that I haven’t mentioned yet – the gearbox. It involves your right index finger and a click of a carbon crescent, because this is the first road-going Zonda to be fitted with a paddle shift. It’s a six-speed ’box made by Cima, with the automation done by Automac engineering, and there are three shift modes: C for Comfort, S for Sport and R for Race. The paddles themselves are fixed to the steering column rather than the wheel but they have a beautifully long arc, making them easier to reach if you’ve got a bit of lock on.

Turning the car to point it back down the hill the added weight and aggression in the wheel is instantly noticeable. Short shifting while I acclimatise, the big AMG V12 has no problem ticking along at just over 1000rpm. A piece of Armco uncurls then disappears altogether in the side window as a corner ends and a small straight appears. Click down a gear and open the throttle wide for what feels like no more than a second or two and the straight has just disappeared. The Cinque simply devours the road, howling like an F1 car gone feral. It is brutally, scarily fast, particularly with vegetation, walls and fresh air drops so close to its wide hips. On a full throttle opening you can sense the ASR kicking in and taming the wheelspin over the more vicious bumps.

It initially feels like low-level flying without the option to eject, and yet you quickly realise that in Cinque form the Zonda is more driveable than ever. With everything screwed down closer to the tarmac, reaction times between command and execution feel almost non-existent, and the transition of what weight there is feels utterly intuitive. It’s particularly noticeable on the brakes, where you seem to be able to brake deeper and later into a corner, judging the grip with the meaty steering, completely confident of where the car’s nose is tracking. On a circuit I suspect it would be phenomenal.

Another straight and another yowling cacophony from the electric blue inconel/titanium exhaust goes bouncing around the hillsides for miles around. But it’s a punctuated vocal performance. There are pauses in the stream of noise and it’s not just me chickening out of the floor-hinged accelerator – it’s the gearbox. I’m afraid that no matter what setting you have it in the shift simply doesn’t live up to the rest of the car. It feels like a last-generation system, with a proper torque interruption on every upshift. It’s a real shame because it spoils the flow of acceleration as the clutch disengages… then re-engages with a jolt and no real finesse. If you want multiple downshifts coming into a corner then you need to plan ahead as well, because it’s no good waiting until the end of your braking to pop them in. Sometimes it feels like you need to start flicking the left-hand paddle before you lean on the big carbon discs. Even those inside Pagani seem to admit that they prefer a manual to this system, but the customers wanted it…

At the bottom of the hill I decide that with gravity against me I might risk turning the ASR off for the run back up. We’re quite a long way sideways out of the first hairpin and as I gather it up I think my eyes are probably wide enough to suggest I’m nocturnal. I should not be doing this, everything rational says that it isn’t worth it. Enjoy the sound, the acceleration, the look of the carbonfibre, just don’t try and drift the bloody billionaire’s toy. But I reckon I’ve got the hang of it now and at the next bend there’s a nice long, measured slide, rear wheels rotating sweetly just ahead of road speed, P Zeros in that perfect state where they’re spinning but you can still feel the friction with the tarmac.

By the time I get back to the top I’ve got a very high heart rate but a huge grin. Simone gives me the thumbs up and smiles as I clamber out. I can’t give the Cinque five stars because of the gearbox, but the rest of it is sensational. It’s testament to everything that Pagani does in its small factory that it’s possible to drive a supercar with a mid-mounted 7.3-litre V12 that fast down that sort of road. I told Harry he had nothing to worry about…