Chrysler rebadges the Lancia Ypsilon supermini for the UK. We drive it in two-cylinder TwinAir form 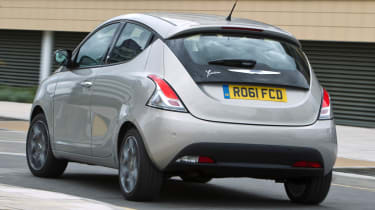 The Lancia Ypsilon supermini, a funky five-door based on the Fiat 500. It comes to the UK in right-hand drive as a Chrysler, and is the smallest model the American firm has offered here. We’ve driven it in 0.9 TwinAir form, prices for which begin at £13,140.

The options list contains several bits of clever technology, including the intuitive Blue&Me Bluetooth setup and ‘magic parking’, though with the car being so titchy and the turning circle tight, the latter option is £575 that is surely better spent on ten tanks of fuel.

Not unlike a 500 TwinAir, funnily enough; lots of fun without being the last word in handling prowess. There’s a fair bit of body roll through corners and the suspension can be crashy over rough roads, especially on the optional 16in alloys of our test car. But you can’t fail to have fun driving it with gusto, the steering precise and well weighted, the five-speed manual’s gearchanges short of throw, and the car pleasingly responsive to throttle adjustments.

The main downside, as with an equivalently engined 500, is that you need to keep the TwinAir engine on the boil to maintain momentum. That means brisk pace and amusingly rorty noises, but a resulting mpg figure that’s nowhere near the claimed 67.3mpg.

An entry-level Fiat 500 TwinAir undercuts the Chrysler by £1245, but the Ypsilon does offer five doors, more space plus a different (and to our eyes, slightly more masculine) look. A Mazda 2 1.5 Sport boasts similar fun and performance in a similarly sized package, costing £13,295 but emitting 135g/km of CO2. That means an annual road tax bill of £115.