It's a turbodiesel mini-MPV with a sporting edge 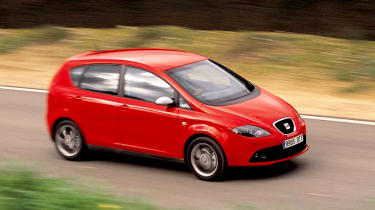 Here we are again, back in the land of cars you never realised there was a need for. This time it's the turbodiesel sporting mini-MPV. Can there really be a market for such things? SEAT clearly thinks so, which is why it has just launched the Altea FR. The FR stands for Formula Racing, in case you were wondering, a sub-brand which slots into the SEAT hierarchy beneath the more extreme Cupra badge.

While you may not be very aware of the Altea on the UK scene, it's obviously a big enough player across Europe for SEAT to have entrusted it with the company's most powerful turbodiesel engine to date, a 2-litre with 168bhp. Derived from the 138bhp unit used in the 2.0 TDI Altea and shared across the VW Group, it gains its power advantage from new intake and injection systems, revised mapping and different turbo internals. There will be a petrol version of the FR along later in the year, but for now SEAT wants to tell the world of its sporting credentials to the accompaniment of compression ignition clatter, arguing that for most of the people, most of the time, boosted diesels are a compelling blend of economy, low CO2 emissions and real-world performance.

Unlike some diesels, the Altea is unable to disguise the fact that its fuel/air mixture isn't ignited via a spark plug. It's rowdy when cold and discernibly diesel on the move. Unsurprisingly, it goes like a diesel too, in that it runs gently into a wall of inertia at 5000rpm, just when you'd like the revs to keep building. Yet here it's a frustration rather than an annoyance, as the engine's smooth as you like and pulls bullishly from 2200rpm. In fact, so strong is its tug that on wet roads you need to apply the throttle with some discretion if you're not to incite instant understeer and the intervention of the ESP stability system. Even on dry surfaces this can be an issue if the revs are low enough - peak torque is a beefy 258lb ft and it arrives at 1800rpm, so spirited bend-taking, not to mention overtaking, requires the application of mind as well as right foot.

As with so many performance diesels, the low-revving (although not slow-revving) Altea FR piles on speed in such a relaxed manner that the speedo often surprises. Its cross-country pace is ably abetted by a chassis with excellent damping control that makes the FR dismissive of crumbly surfaces and blesses it with superb body control. It's an impressive achievement given that the front springs are 15 per cent stiffer, both anti-roll bars thicker, and the ride height 7mm lower than the standard Altea.

Although electrically assisted, the steering boasts reasonable feel and accuracy, and also has a feature I didn't realise I'd experienced until I read the press pack. Driver Steering Recommendation, working in conjunction with the ESP, reacts to an oversteer situation by applying a dab of opposite lock, hoping to encourage the driver to continue the process.

Space galore and H rear seats that slide backwards and forwards to alter the passenger-to-luggage-accommodation ratio serve as the Altea's MPV credentials; big-bolstered front buckets, thick, leather-wrapped steering wheel and a gearknob marked with six forward ratios add the sporting elements. The cabin ambience is let down a little by the mish-mash of plastics used for the facia and door trims, but the biggest item of complaint is the thickness of the A-pillars. They not only have a serious bearing on your ability to see other traffic at junctions and on roundabouts, but can also obscure the apex and extent of corners, hampering your confidence to attack twisting roads.

Overall the Altea FR is a pleasant, competent car that's quick and commodious and has funky looks, plenty of kit and keen pricing amongst its list of attractions. It's difficult to imagine who'd make a conscious decision to buy one, though. The family man probably doesn't need all that poke, the sporting driver is unlikely to need all that space. As an example of what SEAT can achieve from unlikely ingredients, the Altea FR has merit, but I suspect few car buyers (in Britain, at least), will view that as sufficient reason to write out a cheque.