Gordon Murray has already revealed his plans for the ultimate track-only T.50s 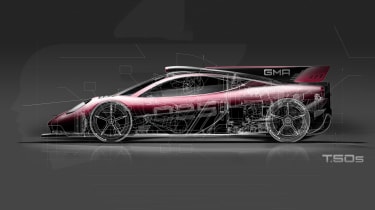 Not content with rewriting the hypercar rulebook in 2020, Gordon Murray is set to unleash an even more potent track-only version of his T.50 this November. There’s nothing unusual about that per se, with Ferrari and McLaren offering their FXX-K and GTR programmes for example, but Murray’s assertion that the T.50s began life as a racing car – and may still be one in the future – lends it an intriguing edge. And then there’s the numbers: just 890kg, more than 700bhp, and 1.5 tons of downforce at the car’s maximum speed, all of which promise to make this a car of otherworldly performance.

It’s enough to make fans of endurance racing weep, but Murray was in talks with the FIA and ACO about entering the T.50s into a possible new supercar class for the world championship and Le Mans. That was two years ago, and when it ‘became obvious they didn’t know what they were doing’ (Murray’s view on the shambolic search for a new set of rules to keep all stakeholders happy) the ‘s’ morphed, for now at least, into the ultimate trackday car. GMA never got as far discussing the T.50’s active aerodynamics with the rulemakers, because Murray fundamentally wasn’t prepared to add some 300kg to the T.50 to meet the stipulated 1200kg minimum weight of the class. 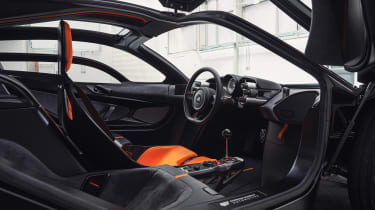 The T.50s (the car will have an official name come its launch this November) was run as a parallel project alongside the road car, and with its own team guiding its development. Although it uses the same carbonfibre monocoque and fundamentals of the GMA-Cosworth V12 as the T.50, there are hundreds of changes and different components, and the car looks quite different. So far we just have this one profile image to go on, but perhaps most striking is the massive delta (in plan view) rear wing and jutting front splitter, teamed with a Le Mans-friendly central fin aft of the cockpit. The giant 400mm fan at the rear is locked in high-downforce configuration, with the underbody ducts permanently open, and air then passes through a redesigned rear diffuser. Apparently as much as 1900kg of downforce was achieved during the design phase, but the team felt there were no tyres available to support such forces.

The V12 now breathes through a periscope-style air intake above the cabin and exhales through a top-mounted exhaust (Murray is investigating a ‘blown’ rear wing concept). Power has edged up to around 720bhp with the ram-air effect (up from around 700bhp on the road car), and the red line remains at 12,100rpm. Inside the engine there are new cams and valves, along with a new air intake set-up, while the engine is no longer connected to a manual gearbox, but rather a single-clutch pre-selector racing gearbox designed and manufactured by Xtrac and that fits within the same ’box casing as the road car’s. Brakes and all suspension components are upgraded and track-focused as you would expect on a pure racing car, while the standard tyre is a Michelin Pilot Cup 2, although the ‘s’ also works with slicks. The interior is completely stripped out, although one passenger seat currently remains for wild rides on trackdays. 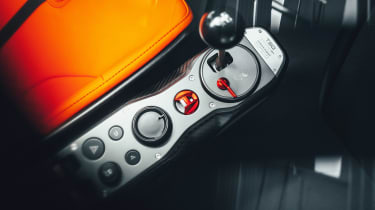 Just 25 examples of the T.50s will be made, at £3.1million plus local taxes, with 15 already spoken for. Then again, GMA sold the remainder of its 100-strong T.50 production run within 48 hours of the recent official unveil. With the T.50s, Murray is also offering something he calls Trackspeed, which is a support package that aims to make each of the 25 cars unique to their owners, not just in terms of colour and trim, but in chassis set-up and specification, too: ‘It’s almost like a shared ownership with the owners; if some just want to use them for trackdays that’s fine, but if there are those that want to start a race team with them then that’s fine too. We hope to have engineering support for a race series one day.’ On that note, Murray is in discussions with SRO, the largest organiser of GT racing series in the world, about a possible GT1 series that the T.50s could be a part of. We certainly hope that becomes a reality.