The Alfa Romeo Giulietta and Mito get the hot hatch treatment with updated Cloverleaf versions, inspired by the Alfa 4C sports car 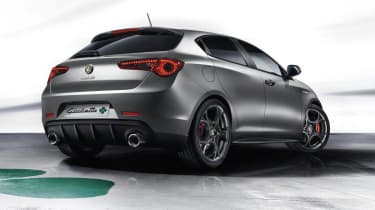 The front-driven Giulietta uses the same six-speed transmission, but mating it to the 4C’s engine results in a 0-60 sprint in just 6.6sec – 0.2sec quicker than the car it replaces – and onto a top speed of 149mph. We liked the TCT ‘box in the 4C, with its seamless upshifts and resulting ability to maximise the engine’s top-end power, though it is a shame to see a manual version of the hottest Giulietta now unavailable as a result.

In the heavier Giulietta, Alfa has retuned the aluminium block engine to produce its full 250lb ft of torque from just 2,100rpm, with 80 per cent of that torque available from just 1,800rpm, providing it with more grunt lower down than in the 4C.

As seen across the Alfa range, the Giulietta’s driving characteristics can be adjusted via the DNA selector. Throttle response, engine performance, transmission responsiveness (and shift patterns in auto mode) and power steering weight can be adjusted to suit, whilst a new fuel intake unit ensures the engine possesses the same racy tone of the 4C.

Outside, the car sports new parts to separate it from the range and bring it into line with hot hatch rivals such as the Focus ST. Two large tailpipes sit either side of a rear diffuser, and 320mm front brake discs are held behind new anthracite alloy wheels available up to 18in in size. A new bodykit is also accessorised with the usual Cloverleaf front wing emblems.

Inside, new leather and Alcantara sports seats and a new leather wheel are accompanied by contrasting stitching and more Cloverleaf logos.

The Mito Quadrifoglio Verde. This car keeps its range topping 1.4-litre MultiAir engine, but sees it mated to the same 4C-derived TCT gearbox. This enables the 168bhp hatch to reach 62mph in just 7.3sec – 0.2 sec quicker than the manual – on its way to a 136mph top speed. Thanks to its more efficient ‘box, the Mito will also produce 52.3mpg – up from the manual’s 47.1 – emitting just 124g/km of CO2 on the EU cycle.

The baby Quadrifoglio Verde receives a similar raft of styling upgrades to the bigger Giulietta, whilst other less hot models in both of the cars’ line ups will become available with ‘QV Line’ styling additions.