Palmersport, the team behind the Bedford Autodrome, buy a bunch of Ariel Atoms for track events 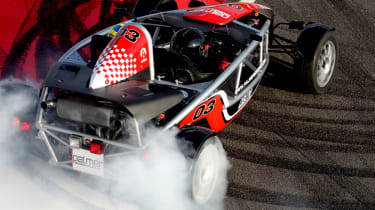 Palmersport has bought a fleet of Ariel Atoms. The company owns a number of UK race circuits, including Bedford Autodrome, evo’s second home. It’s where we do all our track testing, in between the corporate and private guests enjoying a Palmersport event. Currently anyone taking part in those gets to razz around in M3s, single-seaters, JP-LM prototypes and Caterhams; a list the Atom has just been added to. These Atom 3s will have a unique spec, being powered by the normally aspirated 2-litre Type-R motor, but mated to the Sadev 6-speed sequential gearbox that we’ve praised so highly when fitted in the V8 Atom. They will also feature dual controls to allow the instructors some say in their destination.  The introduction of the Atom also introduces a new programme for celebrities to set their fastest lap time at Bedford. The Atom will be used for a ‘SuperGrid’ time and Martin Brundle, Mark Blundell, Johnny Herbert, Jason Plato, Rob Huff, Tiff Needell and Jake Humphrey will be some of the names putting their pace to the test to kick off the leaderboard. The odd motoring journalist (and some are very odd) will also be amongst those setting a time and once the leaderboard is established it will be possible for anyone to come along and attempt to smash those times.