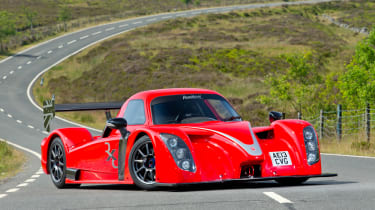 The new Radical RXC has made an appearance at the Frankfurt motor show. Designed to be the world’s most extreme road-legal coupe, it’s styling is reminiscent of a Le Mans prototype with airflow managed to create up to 900kg – the car’s entire kerb weight – in downforce at high speed.

Radical’s first coupe is a new design, with only a few components shared with the rest of the Peterborough-based carmaker’s range.

A 380bhp, 320lb ft 3.7-litre Ford Duratec V6 engine drives the rear wheels via a seven-speed paddleshift gearbox. The latter is a Quaife transmission but with in-house development, with automatic throttle blips during downchanges and clutchless changing. The changes themselves take 0.05sec. The engine is EU5 emissions compliant and can go over 6000 miles between servicing.

Twinned with that sub-supermini weight figure, the engine allows a 2.8sec 0-60 time and a 175mph top speed. While the latter may look tame in supercar circles, the former is in Bugatti Veyron and Nissan GT-R territory.

The RXC gets inboard pushrod suspension with double wishbones at each corner, with four-way adjustable dampers to adjust the Radical for road or track use. Floating brake discs – 330mm front, 310mm rear – are standard with carbon ceramic brakes as an option. The wheels are centre-locking and the biggest ever fitted to a Radical, measuring 17in.

As well as the rather obvious roof (incorporating gullwing doors), the RXC has other concessions to road driving, with Corbeau bucket seats, air conditioning and a heated windscreen all standard, as is electric power steering. Purists needn’t throw their toys out the pram, though, as it the system has five levels to choose from, one of which is ‘off’…

The Radical RXC starts at £94,500. Numerous options, including those brakes, forged alloy wheels, carbon exterior trim and a 480bhp 3-litre V8 engine, can hike this further up. Radical has delivered two cars so far, both of which were specced for track rather than road use.

[video src="http://www.youtube.com/watch?feature=c4-feed-u&v=tUk6b_IV194&app=desktop" /]
Follow us on TwitterFollow us on FacebookEmail us