This all-electric concept car to be unveiled at Frankfurt gives a glimpse into the future of small Audis. 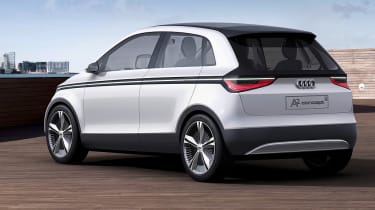 Audi is to use the upcoming Frankfurt motor show to launch an all-new A2 concept, seemingly a direct successor to the A2 of the early 2000s.

Like its forebear, the new A2 concept is technologically very advanced. A purely electric vehicle, Audi says it gives a ‘peek at electric driving in megacities of the future’. The A2’s electric motor delivers peak figures of 116hp and 199lb. ft. which is enough, say Audi, to allow the concept to hit 62mph from rest in 9.3 seconds. The concept has been limited to 93mph by Audi to preserve the range. It also features a ‘semi-autonomous’ driving mode for city journeys. In its current form, the A2 concept can be fully charged through a 230v household plug in four hours. Using a high-current 400v plug, it can be charged in just 90 minutes. The range is said to be 124 miles, or a nice round European 200km.

Audi has made great use of lightweight technologies in the construction of the A2 concept, keeping the weight down to just 1,150kg (the original A2 tipped the scales at 990kg) and aiding the city car’s efficiency levels. The structure is aluminium whilst add-on parts are constructed from carbon fibre reinforced polymer. Furthermore, the wheels pioneer ‘cladding technology’, which Audi claim shaves 2kg off the weight of each wheel. This is done by bonding together a separately constructed alloy wheel base and wheel cladding.

As the first company to introduce LED daytime running lights to their cars, it is perhaps unsurprising that further advances in lighting tech feature on the A2 concept. Termed ‘Matrix Beam Technology’, and featuring on the headlights and tail lights, it allows for diodes and micro reflectors to be used for high and low beam. The tail lights are also adaptive, a sensor monitoring visibility levels and adjusting the brightness levels accordingly.

Perhaps most interestingly, though, is the ‘Audi Dynamic Light’, an LED slash that joins the lights at both ends. As the driver first approaches the car, the dynamic light glows blue and focuses on the door handles to assist entry. It is orange when the car is moving and pulses in tandem with the indicators when applied. The dynamic light becomes red when the car is braking.

The interior of the A2 concept is unashamedly futuristic. The steering and gearchange are electric, the A2’s single gear being selected by one of two touchpads. The other controls the car’s air conditioning and media functions, which include a Bluetooth in car phone and a WLAN hotspot for passengers.

And yet, despite clearly making the A2 as a concept car for the future, Audi has made a feature of one of the last A2’s idiosyncrasies; its fixed bonnet. Whereas with the old A2, the pull-down grille allowed fluid levels to be checked, the Frankfurt concept features a charging socket and a cooling water connection in a similar location.