Audi has released details of its most powerful Q3 so far. Full details and gallery here. 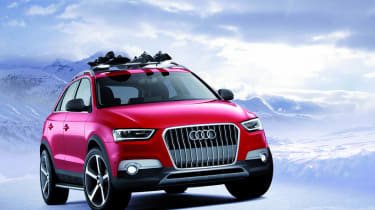 The most extreme version of the Audi Q3 has been launched in Detroit. The Vail, a winter sport themed concept, is the most powerful version of the compact crossover so far, and to go with the flared arches and 20-inch wheels, engineers at Ingolstadt have slotted in a slightly tweaked version of the 2.5-litre 5-cylinder TFSI engine, as found in the RS3 and TT RS.

Winter sports is the theme that Audi have picked for this concept, and as well as the performance upgrades, it is fitted with a whole raft of equipment suited to skiing or snowboarding, including an aluminium underbody guard, heated load-bay mat, and roof-rails designed to hold winter sports equipment.

Following the launch of the standard Q3 in the USA, this concept hints heavily at a production version of the high-powered Q3 for North America, and Europe, although there has so far been no official announcement.