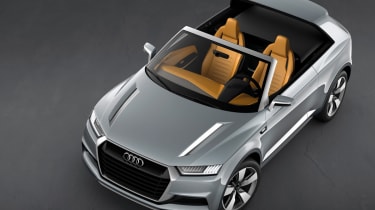 Audi has come revealed a new compact crossover SUV concept called the Crosslane. It hints at a sub Q3 production model, poised to take on the likes of the Mini Paceman.

The concept is powered by a small three-cylinder 1.5 TFSI engine, similar to BMW’s new Active Tourer concept’, as well as two small electric motors – delivering a total of 175bhp. Audi claims the concept could be capable of up to 256.8mpg with CO2 output of just 26g/km.

Audi claims that the Wolfgang Egger-styled 2+2 seater concept leads the way for the lookis of all future Audi Q models.