Audi Q3 2019 review – just another compact SUV, but one with potential - Performance and 0-60 time 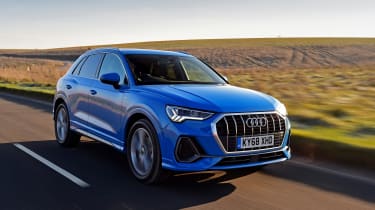 Until the RSQ3 arrives, only the top 45 TFSI Q3 is brisk, reaching 62mph in 6.3sec. Other models are, slow, with 35 models in the nine-second region in both petrol and diesel forms, and 40 models in the sevens and eights. Of course, few buy a compact SUV for reasons of outright acceleration, and the Q3’s merely average times are about right for the class. The flip side here are the wide, flat torque bands for pretty much all powertrains, making all models feel fast enough on the road.

The six-speed manual has a slick, considered shift quality – again it’s nothing exceptional, but good enough in relation to the general class. The seven-speed dual clutch is happiest when up and running, often feeling lethargic at slow speeds and sometimes shuddering as the clutch engages and disengages. This is not an unusual trait for a dual-clutch, mind, and compared to a smoother traditional torque-converter automatic found in rivals from BMW and Volvo, the crisp shifts when you’re up and running are a worthy pay-off.