Your heart screams Audi, while your head says get a new Skoda. So which £30k estate is the one for you? 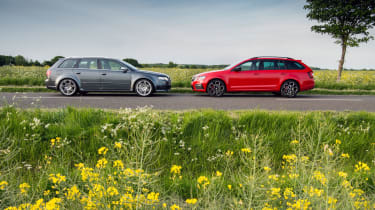 This is a walkover for the Audi, isn’t it? How on earth can a front-wheel-drive, four-cylinder Skoda estate, built on a Volkswagen Golf platform, go tyre-to-tyre with the best-handling iteration of Audi’s core performance car, the RS4? Even this top-of-the-range Octavia vRS 245, with 242bhp and a limited-slip differential, is going to struggle against a car with a 414bhp, 4.2-litre naturally aspirated V8 that revs to 8250rpm, plus four-wheel drive, hydraulically linked suspension and a torque-vectoring differential. And in pure evo terms, where driving thrills, back-road ability and 8000-plus rpm red lines are all highly desirable attributes, there is no competition, surely?

> Find out what the current Audi RS4 is like to drive

But wait, if you’re being really sensible – factor-50 sun cream, salad for lunch, hi-vis jacket packed and ready to deploy sort of sensible – then buying the brand new, in warranty, more economical Skoda makes a lot of sense over the complex, decade-old Audi with its associated super-estate running costs. So really what we’re here to find out is what you’re missing out on, and if the Skoda is worth the rational sacrifice. 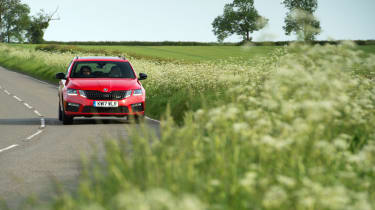 Inside, the vRS is full of surprises. Not for the black-on-black-on-black colour scheme, but there are little quirks that solidify Skoda’s reputation for being sensible: the little tab on the windscreen for parking tickets, cubby holes everywhere, cruise control that stays engaged when you change gear. There’s even a bin. It’s a delightfully easy car to use every day, and with its solid feel, soft plastics and quilted Alcantara, it’s more premium than many preconceptions would have you believe. Its sporty character isn’t overt, though; as well as the faux suede fabric, there’s some supportive bucket-like seats, a slick, narrow-gate gearshift and a prominent gargle from the engine, but that’s about it.

Beyond the superficial you’ll find a stiff body, so although the ride is firm, bumps and jolts never overcome the structure. The hard ride then translates to alert and energetic responses when you reach some corners, the front reacting loyally to steering inputs. The vRS’s long wheelbase makes it slightly less agile than the smaller cars it shares its platform and engine with (Golf GTI, Leon Cupra, etc), but it has that same boisterous attitude that defines modern hot hatches – it just loves being thrust down a country road. 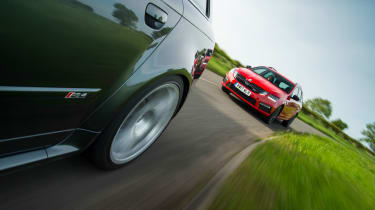 On rough roads with off-camber corners there’s the same polish that’s evident in all those MQB-based performance cars, too, and its VAQ diff is the epitome of that. It’s unobtrusive, allowing very little corruption to the steering as the front wheels pull you down a straight and bumpy road. Then, as you accelerate out of a fast corner, you feel the steering wheel tense as it works the two front wheels together and cleanly swings you round the rest of the bend as if the middle of the car is tied to the centre of the turn. It’s a nice trick, and as your commitment rises, it’s useful to take advantage of the nose being stabilised with the throttle.

> Read our full review of the Skoda Octavia vRS

It might have subtle, clean lines and a reserved grey paintjob, but this Audi sucks attention from the bright red Skoda when they’re parked together. The B7 RS4’s tough stance, arches bursting full of dual-spoke wheels, makes it look purposeful, like it’s going to eat up anything that gets in its way through its massive grille. As an object, no matter how glitzy the Skoda’s 19-inch diamond-cut alloys may be, the vRS is considerably less desirable. The Audi’s grey interior, however, is now hilariously quaint, especially compared to the widescreen TV-like infotainment the Skoda’s is centred around. The huge phone mount ready to take your Nokia 5110 is only a little bit clunkier than the lo-res, non-touch satnav screen. The buttons and interior are frighteningly familiar to me. When I was 18 I drove around in my mum’s B5 A4 Avant (1.9 TDI, the tasty 110bhp version in Ming blue – I had to fight the girls off, naturally). It had covered ten times as many miles as this RS4, yet the click from the climate control and electric window buttons was identical. Not the most scientific test, admittedly, but it hints at just how durable this Audi’s interior can be. 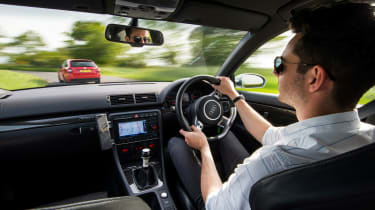 What’s no laughing matter are the seats. They’re familiar in shape to other Recaros, but trimmed in Audi-specific leather and cloth. They cup your back from the base of your spine all the way up to your shoulders and help you find the ideal driving position. What’s more, the side bolsters on the back and base can be inflated or deflated to keep you nice and snug.

Initial driving impressions aren’t that favourable, though, and you begin to think the vRS might get through this test with its dignity intact. The RS4’s steering is slow, the body creaks a little, the gearshift is long and the whole car feels softly sprung. Meandering around you can’t help but think it’s a bit reluctant and obstructive. To wake it up, to tap into the RS4’s angry side, you need to press the Sport button on the steering wheel then extend the engine beyond 5500rpm. At that point the motor takes on a different character as it starts to chase after its 8250rpm limit with a little more ferocity and finds its fulsome, if a little distant, V8 voice. It’s in a different league to the thin, digitally enhanced, workaday din emitted by the Skoda.

But it’s not just the V8 that changes persona – the whole car takes on a new attitude, too. The composed ride remains, but as your commitment increases, the chassis rises to the challenge. Turn-in isn’t as keen as in the Skoda, and you need to keep the chassis loaded unless you want the car to follow the nose-mounted V8 rather than the direction the tyres are pointing in. But the more load you force into the suspension, the more it starts to fight body roll, and the RS4’s chassis comes alive, almost as if 300kg has just been unloaded out of its capacious boot.

Halfway through a corner the car’s balance shifts to the rear, and it begs to be driven on the throttle. After every single corner you think: ‘I should have got on the power sooner.’ So you try and get on the throttle earlier and earlier, and still the back end engages and helps steer you from apex to exit. 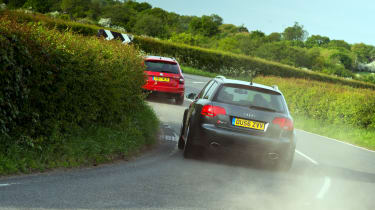 The RS4 still behaves within the boundaries of what defines an Audi: grip, safety, composure are paramount. But, for once, genuine adjustability and real driver influence have been allowed to cohabit in the same space – whether it’s the angle at which you enter a corner, or the attitude you leave it with, the brakes and throttle make a real difference. With these attributes you can then make the most of the terrific, if rather subtle by modern standards, V8. So rather than it being the car’s only redeeming feature – a case in so many members of Audi’s back catalogue – the engine has found its match.

The Skoda might be slightly battered and bruised by this company, but it makes a compelling case for itself as a second car to complement something impractical, expensive to run and scintillating to drive. Because as well as performing everyday chores with skilful proficiency, it isn’t disappointing along a B-road; it’s a credible performer and you can have an entertaining drive in it. But its talents don’t run deep enough that you would find yourself driving it just for fun.

The RS4, however, could be your only car, the one to get you out of bed at 4am on a Saturday to make the most of some quiet roads. It’s also the car that, on the same day, you could make a sensible trip to B&Q in to buy compost or fence posts or a lawnmower, just like sensible people do.

‘The RS4 is a good future classic and the biggest drawbacks to it are age-related problems.

‘Firstly, inlet manifolds wear out. It has an air-guide system in it where flaps open and close, helping to increase air velocity and improve low-down torque. The spindles turn and wear – they’re made of plastic and aluminium – and Audi doesn’t do replacement parts, so you have to have a new manifold at about £2700. The oil coolers have a habit of corroding, too, and can be about £1000 for a new one, plus pipes.

‘Performance-wise, the engines suffer from carbon build-up inside the heads. It’s a common problem on all FSI [direct injection] engines and it reduces the airflow into the engine, which in turn reduces power. A carbon clean for around £500 is worthwhile, removing the manifold to physically clean the carbon out and bring the engine back up to factory specification.

‘External oil breathers have been experimented with to try to sort the issue, but they don’t make any difference. The problem is to do with the way engine crankcases breathe back into the engine, as well as the valve overlap.

‘There are quite a lot of vacuum-operated items on the engine and when they leak they reduce power, too. The leaks are easy to identify, but only when you’re familiar with the engine.

‘Every RS4 with 50,000-miles plus will be suffering from carbon build-up, vacuum leaks and a corroded oil cooler. We have seen the engines produce as low as 330bhp because of this. But if everything is done, it’ll be around about the 400 to 410bhp mark.

‘The DRC [Dynamic Ride Control] has been a reliable system, but, just the same as any older car, the RS4 requires shock absorbers. If you change any of the shocks, the system then needs to be repressurised, which is a specialist job.

‘The RS4’s Recaro seats were an incredibly desirable item and were being stolen. A couple of years ago RS4s were just being written off because of the cost of the seats. To replace them costs thousands because you have to buy every component individually.

‘We recommend customers change the fixing points or fill the bolts full of chemical metal. After, if the seats do need to be worked on, it can still be done. It’s more of a pain to do, but it does mean someone else can’t just take them out in two minutes.’