The first stage of our mini Veyron’s engine upgrade is complete, with unexpectedly good results, while stripping out unnecessary weight has had an interesting side effect 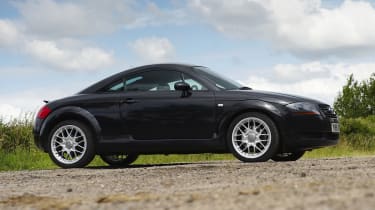 The biggest news filtering back from the Frankfurt motor show to Evo Towers wasn’t the launch of the Ferrari 458 Italia or Lamborghini’s Reventón Roadster, or even the first public appearance of the gullwinged Mercedes SLS AMG. No, it was that the top men at Bugatti had admitted that they are keeping an eye on our little project car. (Hello, Julius. Thank you for not getting too angry at our tweaked version of your lovely logo.) I’m not sure they see the Veyrog as a major threat to future Veyron sales, but it’s good to know they’re watching, and with things moving apace the big Bedford Autodrome showdown can’t be far away…

Stage one of our TT’s engine work is now complete and we’ve already exceeded our first target by a substantial amount. We were hoping for 300bhp and a similar slug of torque, but we’ve ended up with 309bhp and a massive 365ft lb of torque. Under the bonnet the guys at Autograph have installed new injectors, a fuel regulator, actuators, boost control valves, loads of squidgy hoses, a new air filter and an intercooler. There’s a bespoke Milltek exhaust system too, which crackles and pops loudly when you’re pushing on but isn’t uncomfortably boomy the rest of the time.

None of these modifications are overtly showy, and I reckon it’s pretty cool that so much extra performance is hidden underneath slightly scruffy bodywork. It’s the ultimate sleeper. But not only is our TT powerful, it’s still very driveable. Yes, it hisses and fizzes every time you lift off the throttle and all that boost pressure is dumped back into the atmosphere, but there’s a strong pull across the rev range that builds to a real kick above 5000rpm.

We had to have a new clutch fitted as the old one was shot, so it made sense to get ourselves a meaty Sachs version in preparation for later. It feels a little heavier underfoot, but by no means calf-achingly so, and it’s now actuated by one of the new Momo pedals we’ve had fitted as part of the interior makeover. All the original seats have gone, the fronts replaced by a pair of tasty Recaros, while things have been finished off with more Momo details including harnesses, a suede wheel and a new gearknob. We also have an on-board Race Diagnostics Liquid Gauge screen too, which fits very neatly into one of the air vents and displays the temperatures and pressures of just about everything as well as lap times and 0-60mph runs every time you stop at traffic lights. It’s all very Nissan GT-R.

So not only does the Veyrog now look fantastic inside, but some 157kg has been shed along the way – that’s more than ten per cent of the car’s original mass. The standard seats with their multitude of motors were a huge burden to the TT, but now, despite leaving convenience items like the electric windows and air-con in place, the Veyrog tips the scales at a relatively skeletal 1322kg. In fact it’s now so light it rides higher on its springs and looks like it’s ready for a spot of off-roading!

Adding lightness should improve handling, but the extra suspension travel has increased the roll angles and, to be honest, it’s pretty horrible lurching into turns. Around the West Circuit it feels weird. The brakes were terrible before, and the increased workload means that the first lap is the fastest as they quickly cry enough. Yet despite the TT’s aversion to twisty bits, the extra fizz in between them means it still eclipses its time in standard 225bhp trim by two seconds. It also fires us from rest to 60mph in 6.5sec – half a second faster than before.

We’ll soon better those scores though, because there’s an AST suspension kit to go on yet, along with new wheels and tyres. These will be fitted after we’ve sorted the car’s brakes, which is a job we’re going to do ourselves. Find out how we get on next month.