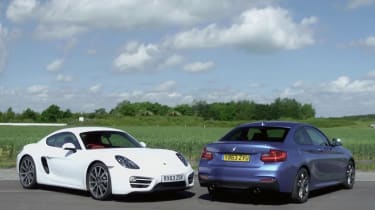 If you're in the market for a sub £40k sports car that you could live with every day, two cars might immediately spring to mind: the Porsche Cayman and BMW M235i.

With relatively reasonable running costs, strong reputations for build quality and entertaining handling, they might feasibly offer the best of both worlds to many buyers, especially the four-seat BMW.

Move the battle to the track, where rear legroom and mpg figures lose significance, and these two cars are more closely matched. Whilst the BMW's 321bhp turbocharged 3-litre six-cylinder engine gives the M235i the advantage on paper, the Porsche's lighter 1310kg kerb weight should see it make up the straight line deficit on the technical turns of Blyton Park in Lincolnshire.

It's not exactly underpowered anyway, the mid-mounted 2.7 flat-six Porsche engine producing a healthy 271bhp at 7400rpm. But even so, the BMW races from 0-60 seven tenths quicker in just 5.0sec, before maxing out at a limited 155mph top speed, the Porsche powering on until 164mph.

Priced at £34,260, the BMW is the more affordable of the two however, because the Cayman only just sneaks in under £40k at £39,694. But that does get you a mid-engined sports car with a typically Porsche flat-six soundtrack to tickle the back of your ears, the BMW's turbocharged unit requiring a little synthesised help to give it the tone we'd expect a car bearing the iconic M badge to have.

But when the stopwatch is ticking, vocal talents fall behind balance, traction and driver involvement. The BMW might have the race between traffic lights sewn up, but with Blyton requiring a car to be as nimble as it is fast, who would bet against a Porsche?

Watch the video above to find out which is faster, the Porsche Cayman or BMW M235i...