A practical super coupe, or little more than an overpriced M5? The new BMW M8 Competition Gran Coupe has been revealed, completing the range 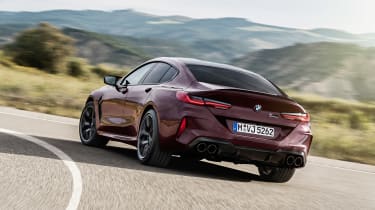 BMW has taken the wraps off its four-door Gran Coupe version of the BMW M8 Competition, a sleek, low, four-door coupe with models like the AMG GT 4-door and Porsche Panamera Turbo in its crosshairs. Ostensibly, the Gran Coupe is mechanically identical to the M8 Competition Coupe and Convertible, but with an extra pair of doors, and an extra 200mm of wheelbase to help fit them in.

Despite the bigger dimensions, the Gran Coupe packs some serious performance numbers, reaching 62mph in just 3.2sec and 124mph in 11sec. Top speed is the usual 155mph as standard, but specify the M Driver’s Package and this will rise to a heady 190mph. Propelling the five-metre long M8 Gran Coupe to such impressive numbers is the same 4.4-litre twin-turbocharged V8 engine seen throughout the upper echelons of BMW M’s range. As in the M5, X5 M and X6 M Competition models, the engine’s peak power is rated at 616bhp at 6000rpm, with a plateau of 553lb ft of torque spread between 1800 and 5600rpm.

BMW’s trademark combination of Double-VANOS and Valvetronic systems are standard, as is the increasingly commonplace hot-vee turbocharger arrangement, which sees the exhaust exit within the vee of the block and straight into the two turbochargers mounted adjacently. As well as spooling those turbos quickly, the hot-vee arrangement also reduces the engine’s size, aiding packaging under the bonnet.

Power is sent via an eight-speed ZF automatic transmission to all four wheels. On the rear axle, BMW M has fitted its torque vectoring M Active rear differential, which is able to shuffle power to either of the rear wheels depending on conditions and the selected driver mode. Also like the M5 and other M8 Competitions, the front axle is able to be physically decoupled from the drivetrain, making it totally rear-wheel drive for purists, and protagonists.

BMW has not mentioned weight figures for the M8 Gran Coupe, but will likely be more than the 1960kg weight of the M8 Coupe, this is despite the on-paper performance figures being identical to those of the Coupe. Helping the Gran Coupe keep its weight contained is a standard CFRP (carbonfibre reinforced plastic) roof, and the carbonfibre core chassis. 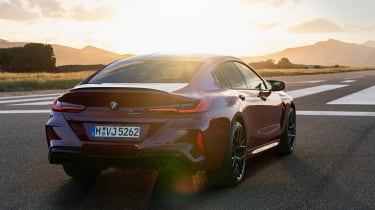 The M8’s other bespoke technical features include an Integrated Braking System (which condenses the master cylinder, braking input mechanism and brake control tech into one system) adaptive dampers and variable ratio steering are also part of the package. You will however notice an absence of all-wheel steering, air suspension or active anti-roll systems, such as you might find in some rivals, all helping to keep that weight figure under control.

Aesthetically, the M8 Competition Gran Coupe is precisely as you might expect, with an identical nose forward of the a-pillar attached to the Gran Coupe’s somewhat lumpen body shape. The rear bumper, complete with four 100mm exhaust outlets is bespoke and that rear end is finished off with a small lip spoiler atop the very exaggerated, almost ducktail-like bootlid. Inside, the same rules apply, with an interior that’s identical to the M8 Coupe and Cabriolet, bar the extra rear seating provision.

Local pricing has not been set yet, but expect around a £2500 drop over the £123,435 M8 Competition Coupe to somewhere around £120,000. This places the BMW quite a bit higher up the pricing spectrum than an Audi RS7, and bang on target for the less powerful 542bhp £117,918 Panamera Turbo. The Mercedes-AMG GT63 4-door will set you back £121,495, and get you closer to the BMW’s 616bhp peak power and four-door coupe cabin. The elephant in the room remains BMW’s own M5 Competition, which is nearly as quick, just as powerful, more practical and a chunky £20,000 cheaper to buy, although it lacks the M8’s flagship status, if that’s something that appeals.