BMW 5-series review - is this the best saloon in the world? - Performance and 0-62mph time

BMW’s latest suite of engines is definitely one of the 5-series’ major draws. At the entry point is the ubiquitous 2-litre turbo diesel producing 187bhp. Badged 520d, a relatively lithe kerb weight and snappy automatic gearbox mean it will reach 62mph in around 7.5 seconds. The Mercedes-Benz E220 d is both quicker and more efficient on paper, but the differences are negligible in the real world.

The other four-cylinder engine is found in the 530i, which like the 3-series has dropped two cylinders despite the historical nameplate. The 0-62mph dash is dealt with in a brisk 6.2 seconds, but performance all-round is impressive, certainly for something that can still return over 50mpg on the combined cycle. 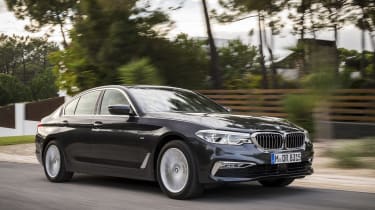 Confusingly, the 530d retains its inline-six engine, besting the 530i by half a second in the 0-62mph sprint. The 530d is perhaps the surprisingly effective sleeper in the range, as the stout torque figure gives supreme performance at any velocity. It sounds the part too, with a muted growl that's far more appealing than any diesel has a right to be.

Top of the tree is the 540i, doing the deed in just 4.8 seconds, but the petrol powered straight-six is not the most impressive 5-series engine and plays second fiddle to the supremely talented diesel. It's fast, but the linear power delivery and muted soundtrack sap any senstation of speed.