The BMW i8 will be the company's first electric sportscar. evo gets an early ride in the car during its cold weather testing in Sweden 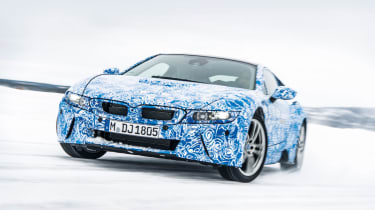 When it comes to electric cars, BMW is hedging its bets by developing both fully electric and plug-in hybrid machines under its trendy new ‘i’ sub-brand. To discover what we can expect from this new generation of BMWs, I’ve travelled to the company’s winter testing base at Arjeplog in northern Sweden, to hitch a ride in the i8 coupe while it undergoes final testing prior to its unveiling at the Frankfurt motor show in September.

A quick scan of the i8’s specification reveals that ‘radical’ is probably too tame a word to describe the inner workings of this revolutionary car. There are three separate power units for starters. Where you’d expect to find a regular engine sitting under the bonnet, there’s a 129bhp electric motor instead. That motor powers only the front wheels via its own dedicated two-speed gearbox, and is fed by a lithium-ion battery that runs down the centre of the car. The battery is big enough to give the i8 an electric-only range of 21 miles.

Open the rear hatch and you discover BMW’s newly developed three-cylinder, 1.5-litre turbocharged petrol engine, which delivers 220bhp and 221lb ft to the rear wheels via a six-speed automatic gearbox. But sitting alongside this engine there’s an additional 13bhp electric motor-cum-generator, which can either give additional power to the rear wheels or generate volts to recharge the battery. Running together, these three power sources give an i8 driver around 350bhp and 400lb ft to play with – enough to power the i8 to 62mph in 4.6sec and on to a limited top speed of 155mph.

BMW isn’t allowing us to drive the i8 yet (that’ll come later this year), so today I’m being chauffeured by BMW’s head of chassis development, Jos van As. And because I know he’s a serious car nut (he has a supercharged Ariel Atom in his garage), I’ve got a feeling this is going to be fun…

We head out onto the frozen lake and van As begins the demonstration by drifting the hard-working i8 development car for several laps around the huge test circle. I can see plumes of snow and ice erupting from the spinning wheels as they scrabble for grip, but inside it all feels remarkably together, with the characterful three-cylinder thrum from behind keeping us nicely entertained. Even from the passenger seat you can sense the front electric motor is working pretty hard, with the clever ESP system balancing the amount of power the front motor and rear petrol engine are delivering without the driver really noticing.

It’s all clever stuff, especially when you think that this i8 should be capable of delivering 104mpg on the combined EU cycle. But van As is determined to change people’s perceptions of plug-in hybrids being dull to drive with the i8. He reckons today’s already impressive demo is down to all the hard work BMW has already done to make sure the trio of power sources work together and deliver the best driving experience possible.

After spending more time playing hooligans on the frozen lake than we really should, van As prises us away and we head out onto the surrounding public roads to see how the i8 reacts to more typical surroundings. We start off in electric mode, which basically means we’re travelling in a £100,000, front-wheel-drive 129bhp BMW coupe. Thanks to the i8’s lightweight carbonfibre structure, acceleration from rest feels brisker than I was expecting, but then the electric motor puts out a useful 184lb ft of torque from zero revs – plenty for everyday commuting needs.

The eerie hum of the electric motor is addictive; its constant note makes the acceleration feel even more seamless, as if you’ve been hooked up to an invisible winch that’s reeling the car in towards the horizon. All the electric cars I’ve travelled in have delivered this surreal experience, but it’s made all the better in the i8 by knowing that you only have to press ‘Sport’ on the dash to bring all three power devices into play and enjoy a completely different driving experience.

Now the three-cylinder engine chimes in, and as van As pushes on, it gains a much harder induction note, although the upchanges delivered by the rear-mounted six-speed auto gearbox feel more slurred than I’d like. Let’s hope this is rectified by the time we drive the production versions.

There’s no doubt that the performance in Sport mode is much more in line with what you’d expect from a £100k BMW. From the passenger seat, the i8 feels agile enough to make a regular BMW 6-series feel like a lumbering antique, and I wonder if the i8’s reduced tyre width (as well as weight loss) has something to do with it. The standard tyres are 195-section at the front and 215 at the rear, very similar to the rubber on a Toyota GT86 or Lotus Elise S, which is quite unusual for a 155mph, 1480kg car. The narrower tyres are chiefly to save fuel but also to deliver more ‘feel’ at the wheel; to me their fitment indicates that there’s been less emphasis on outright grip and lap times – good news for enthusiasts.

I get the feeling that the i8 represents a new start in sports car design. It’s a stylish (but expensive) solution to the hard-hitting next wave of CO2 regulations being introduced in 2015 and points to a new experience for keen drivers of the future. BMW chose the name ‘i’ to represent ‘innovation’, but it could just as well stand for ‘intrigue’, because that’s what the i8 means to me.