The Veyron is already the most extraordinary performance car ever built. Now Bugatti has launched the roofless Grand Sport version. Henry Catchpole straps himself in and prepares to have his senses assaulted 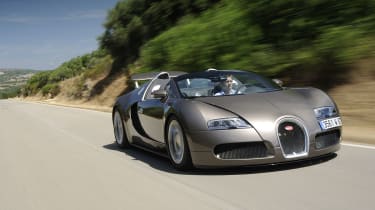 Far from sun-drenched roads, far from warm tarmac and the cockpit of a Veyron Grand Sport, I’d like you to put yourself in a coastguard’s cottage at night. It’s bare inside and the small building is being assaulted by a gale force storm. The wind is whistling and howling through the cracks around the doors and windows. Outside, every few seconds a wave breaks on a shingle beach before crashing into the rocks on which the cottage is standing. It’s quite a night, and, like all the best nightmares, there’s a lion in it too. Obviously you’re adding to the cacophony by kicking the angry Aslan and making it emit a sort of low guttural growl/snarl. Then you close your eyes and turn your back on it all, so that behind you there is the sound of wind, waves and a snarling lion…

Open your eyes. The sound remains, reverberating in the air around you, but you’re not in a coastal cottage. Now you’re in third gear, braking, entering, exiting, turbos lit then wastegating, engine growling, pounding through Sardinian corners in a Veyron Grand Sport.

It’s this sound and the sensations of speed that really sets the Grand Sport apart from the original. Travelling in the closed car is apparently like travelling in a bubble – quiet, refined and, aside from the G-forces trying to rearrange the natural position of your internal organs, almost serene. I say apparently because until today there has been a Veyron-sized hole in my CV. I’d tried to convince myself that it didn’t really matter. After all, according to The Knowledge, it’s not even our favourite supercar, so how much could I be missing out on?

But when I arrived at the hotel in Sardinia on Sunday evening and saw the Grand Sport sitting outside reception I knew I’d been kidding myself. Matt Vosper and I both dropped our bags and just walked round it like wide-eyed schoolboys. I don’t think we even dared touch it. It had the roof on then and to be honest looked identical to the coupe except for a slightly extended windscreen and a roof section that jutted out slightly between the two intakes (which now house roll-over hoops). The bizarre thing is that the Bugatti isn’t an extravagant shape, and painted in metallic brown (titanium on the colour chart) it could, should be a big non-event. Yet it isn’t. It is utterly fascinating and mesmerising. It has the ‘wow’ factor and then some. It’s a bit like meeting a famous person – although they’re dressed in a grey suit and clearly just a human being like anyone else, they’re still somehow very much not like anyone else. Bugatti describes the Veyron as having a ‘low profile but high presence’, which sums it up quite neatly.

So, however much nonchalance I tried to arrive with, by Monday morning I’m bouncing-off-the-walls excited. Pierre-Henri Raphanel, the ex F1 driver, serial frontline Le Mans competitor (best result was second in a McLaren F1 in 1997) and now the official Bugatti test driver, has sat next to over 2000 customers and journalists since 2005 and he’s waiting for us by the car, now with its roof off. If you know your Veyrons, you might notice a few detail changes being introduced on the Grand Sport. Most obvious are the new horseshoe design wheels (which sounds like a potentially odd concept) and the LED lights. Inside, there is now leather where there used to be Alcantara (in case it rains) and there is also a rear-view camera and sat-nav, the screen for which is in the right-hand side of the rear-view mirror. In the instrument pack there is also a digital speed display option in the central rev-counter, so that you don’t have to peer at the rather small dial to its right to see if you’ve cracked 200mph yet.

Despite looking chunky, the door is light to open and once across the wide sill there’s actually a lot more room inside than you might expect for a supercar. Pierre-Henri drives first and as we pull away from the hotel a Golf comes hurtling round a corner and comes to a stop inches from the biggest dent imaginable in a no-claims. For the first half-hour we cruise along the coast while Pierre-Henri gives a very well rehearsed but eloquent introduction to the car, all the time driving at about 28mph, even, frustratingly, on deserted and inviting stretches of road. I listen intently because it’s interesting stuff (a bird once made a mess of the famous horseshoe grille, so it’s now made of titanium; the rear wing on the GS has an angle of 22 instead of 15 degrees; there are oil tanks underneath that no-one other than the service department sees that are made of beautifully turned aluminium) but part of me is just desperately willing him to drop to second and floor the throttle.

And then, without much warning, he does. And a train going full tilt appears to run into the back of us and carry us up the road without breaking stride. Adrenalin spikes in my chest, my legs and arms go light and my stomach disappears completely in that wonderful freefalling rollercoaster sensation. Yes, it really is as mind-alteringly fast as I’d hoped and I can’t help grinning.A couple of miles further on we pull over at the side of the road and swap places. The driving position is very slightly reclined but you don’t feel like you’re sitting ridiculously low, and importantly there’s a really good view of the road. You can even see things in the small wing mirror perched close to you on the door. Things like rapidly receding GT2s. Twist the key a quarter-turn right, press the starter button on the transmission tunnel, the starter spins for a couple of seconds and the 8-litre, quad-turbo, W16 comes to life quite demurely, settling to a big, bassy tickover that sounds not unlike an Intercity 125. The gearlever re-centres after every input, so nudge it a click right for Drive and it springs back. Then lift your foot off the brake, there’s a little bit of creep, and squeeze the throttle like you would in a DSG Golf to move off.

The first few miles are surreal because the Veyron is just so easy and uneventful to drive. The gearbox self-shuffles naturally to fifth, the steering is light and precise like an Audi TT’s and it doesn’t feel unwieldy. There’s plenty of turbo lag below 2000rpm as well so even a prod of the throttle elicits lots of whooshing and sucking (back in the storm-battered cottage) but not much action. I guarantee you could drive it and (if you could forget that it’s worth £1.4million) be completely relaxed. Bizarrely, though, its very civility unnerves me slightly because I know that sitting behind is another unused 900bhp. It’s like sharing a small lift with Mike Tyson on the way to a cage fight and him making small talk and laughing lightly at any lame joke you make.

Eventually, after about 15 minutes we turn inland and there’s an empty straight. Use the left-hand paddle (it’s more of a switch attached to the back of the beautiful wheel) to drop instantly to the heart of the 2200-5500rpm maximum torque spread, then nail the throttle as wide as you dare. And if your eyes and brain can cope then you might as well go all the way to the floor with the pedal because traction from the world’s largest road tyres (365-section rears) is unimpeachable in the dry. The DSG ’box automatically upshifts at 6500rpm and sustains the charge. As you pass 90mph the windows automatically go up and as you reach three figures the headlong rush seems to get madder still with the intakes ripping into the air, compressing it and mixing it like never before. The speedo needle rushes round the dial like it’s the rev-counter and then at 150mph my first real corner arrives and the carbon brakes soak up all that speed and mass instantly and reassuringly.

The feeling of utter stability allows you to use the power in a way that shouldn’t be possible for anyone other than the super-gifted, and amazingly soon you just settle into driving the Veyron as hard as you want: leaning on the brakes into corners and feeling the nose tuck in, then getting on the power early, sensing the boost swell behind you and the car get up on tiptoes before launching you out of the corner quicker than a cartoon. No fuss, no tramlining, no wheelspin, just speed that you can actually make work and flow with the road.

You sense the weight in the slower corners and occasionally feel ESP nibble at the brake pedal under the ball of your foot to stop a slide you didn’t know was about to begin. But most of the time the Veyron feels solid rather than heavy and slices into direction changes with a lightweight’s ease. If you did turn ESP off, you’d need to trail-brake to get oversteer, and a 450kg engine combined with a relatively shallow steering lock do not a happy pairing make.

There’s actually a bit more feedback in the Grand Sport thanks to the changes to the chassis, which has been stiffened with higher strength carbonfibre to compensate for the roof loss. Once up to speed, the car soaks up bumps, but through the rough Sardinian towns it was certainly a touch jigglier than you’d expect. The first 30 GSs will go to existing Veyron owners and Raphanel reckons that some may be surprised by the slightly stiffer ride.

And if it rains? Well there’s an umbrella-style soft-top that you can unfurl and click into place and then drive slowly home (well, not exceeding 100mph). And if you think that’s a big compromise, then you’re wrong because according to Raphanel you don’t want to do more than 60mph in any Veyron in the wet for fear of terminal aquaplaning thanks to tyres that only have 6mm of tread even when new.

So, was it worth the wait? Definitely. The high you get from the acceleration alone is addictive and the fact that you can use it makes it incredible. No, it doesn’t move around and involve you like some – you tend to pilot it rather than drive it – so ultimately it can never give the satisfaction of, say, a Carrera GT. But a machine capable of that sort of pace can never be called boring.

The Grand Sport wasn’t planned from the outset of Piech’s project, yet ironically it is now probably the Veyron to have. You won’t notice the 0.2sec difference in the 0-60 time, but you really will notice the heightened sensations of speed and sound from having no roof. Of course I really need a go in a coupe to be sure…

Hyundai’s i30 gets a refresh, and the new i30 N is on its way too
Visit/hyundai/201819/hyundai-i30-fastback-n-versus-the-nurburgring