The Fighter is like a Ferrari 599 made by Hush Puppy - but is it a real alternative to our 2006 car of the year? 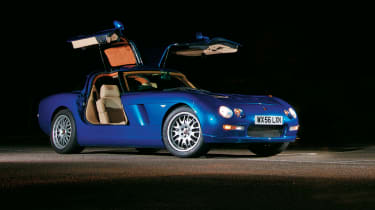 Take a stroll down Kensington High Street in London and at number 370, the capital’s most iconic car showroom and Bristol Cars’ only point of contact with the outside world, you’ll see a couple of them – one a traditionally demure deep maroon, the other a dazzling Gallardo-esque metallic orange. It’s a suitably in-your-face colour for a car called Fighter, though the willful quirkiness and refusal to pander to fashion means, orange or not, it still looks like nothing else on the road.

After half a century of building essentially the same car – the body styles may have changed but the basic template is still large, luxurious, mildly sporty long-distance tourer powered by ancient Chrysler V8 – the Fighter is Bristol’s launchpad into the 21st Century. And how. Modified Chrysler Viper 8-litre V10, two seats, gullwing doors, 0.28 drag coefficient, a claimed 210mph and 0-60mph in 4sec and, above all, supremely useable, sensible and comfortable.

The merging of missions is manifested in the Fighter, which could well be the sanest, most practical 200mph+ supercar ever made. True, that image was muddled somewhat with the recent announcement of the twin-turboed, 1012bhp, Fighter T with its even lower, 0.27 Cd, and Veyron-vaporising claimed 270mph top speed. But that’s an adventure for another day, possibly another life. This evening, Toby and I are taking the regular, normally aspirated £229,000 Fighter (525bhp or 550 if you’re closing in on 200mph, thanks to a mild ram supercharging effect) for a spin up the M4.

On the way we talk aesthetics (unique and vastly better in the flesh than photos), Vipers (great engine, terrible gearchange, tricky handling on the limit), Fighters (even better engine, miraculously improved gearchange, utterly trustworthy handling on the limit), car collector, publisher and evo friend Simon Draper (whose early-build car supplied many of the first driving impressions, including our first encounter with the Fighter in issue 078), and all that stems from an aerodynamics-first, aircraft techniques approach.

Which turns out to be pretty much everything, from the modest width of the aluminium and carbon composite body – a whopping 115mm narrower than a Viper’s – to the uninterrupted all-round vision of the teardrop-shaped cabin and the generous ground clearance.

Usual concerns about downforce, with its implicit drag, simply don’t apply. There are no wings, spoilers or other aerodynamic appendages. The whole bodyshell is effectively one big wing but designed to eliminate lift at speed, hence one of the aerospace-trained engineers at Bristol’s factory near Filton airport telling Toby it was ‘the worst wing we ever made’. The upshot is acceleration above 120mph that would give even a 599’s driver something to think about.

The ease of entry and exit provided by the gullwing doors, the ample and internally accessible luggage space, the almost taxi-tight turning circle and a full-sized spare wheel confirm that the thrust of the design is all about making the Fighter a practical day-to-day proposition.

The car is remarkably light too; just over 1500kg at the kerb (a 599 weighs 1688kg), and this despite what must be a fairly sizeable contribution from the massively strong steel box-section chassis with honeycomb flooring and a couple of heavy duty roll-hoops designed by race-car engineer Max Boxstrom whose credits include the Aston Martin AMR-1 sports racer that raced at Le Mans in ’89. The coil-sprung double-wishbone suspension with anti-roll bars front and rear is also largely Boxstrom’s work.

The gullwing doors are far more practical than they sound, swinging up to reveal a deep sill that’s easy enough to negotiate with a reasonable degree of grace. The seats, trimmed in soft leather and the result of countless iterations are generously padded but properly supportive. The driving position is commanding by supercar standards, which makes the Fighter particularly easy to place in a confined space (the clearly visible extremities of the impressively long bonnet are just that, there are no hidden bulges to catch you out) and easy to thread down a twisty country lane, come to that.

There are aircraft allusions, naturally, but they’re subtly executed and fascinating rather than flashy; modular dash fittings for the main console components, an array of overhead instruments (including an ‘engine hour’ meter), and the side windows have small opening sections like a fighter plane’s. Bristol doesn’t neglect its own car making traditions, either: the steering wheel is an updated version of the kind it used in the ’50s with serrated spokes, albeit now fashioned in carbon.

You feel this car. The rigidity of the chassis, the geometric accuracy of the suspension, the effortless manipulation of g-force, the hard-bodied yet supple responses. The Fighter doesn’t feel 599-furious, but it does feel force-of-nature serious. Deep core and primal. It’s the rumbling start up, turning out 350lb ft at tickover. It’s the low, resonant induction howl at about 3500rpm. And it’s the air-rippling infra-bass that underscores heavy torque action. So deceptively laid-back yet seductively rapid is the experience, the Fighter quickly gets under your skin and nudges you towards a more relaxed frame of mind.

Bristol has modified the standard Viper shift by making the throws shorter and canting the lever toward the driver. It isn’t exactly a flick switch, and the gear-planes are so close that they take some learning, but it’s machine-bolt positive and very satisfying. Then again, such is the torque of the mighty V10, and so long the intermediate gearing, you can just slot the lever between third and fourth and summon enough urge for any occasion.

The chassis feels incisive, neutral and nimble with fine traction and direct, communicative steering. In fact, the Bristol handles every bit as adroitly as its front-mid-engined layout, 48/52 percent front/rear weight distribution and low centre of gravity might lead you to hope. There’s a little understeer in tighter turns and the tail will lean on the edge of oversteer if you open the taps in faster sweeps. Yet the feel and collectability of it all is inspiring.

That deliciously broad and finely adjustable band of behaviour encourages commitment and flatters mistakes. Reduced to basics, it turns in, points, grips and goes. Co-ordinate mind, hands and feet and it flies. Let your concentration spool down a tad and the consequences aren’t in the least bit dire.

The Bristol may not be a substitute for the almost indescribably exciting Ferrari, but it is a completely beguiling alternative. Thing is, of course, if you can afford the Fezza, you can probably afford the Bristol too. No-one said life was fair.