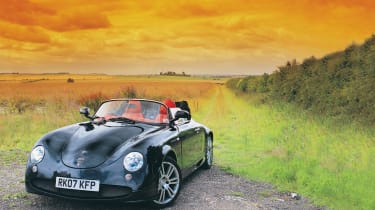 It’s no surprise to learn that most of the enquiries about the PGO Cévennes have come from Mini owners. It is, after all, another modern interpretation of an iconic motor, and a pretty one at that. Like the Mini, it’s chunkier than its inspiration, but maintains the essence and charm without looking awkward or overly contrived. I doubt you’ll have heard of PGO (we hadn’t), despite the fact that it’s been around for some 27 years and has been building the Cévennes since 2005. Porsche has heard of them, though – it attempted to sue the tiny French manufacturer for plundering its heritage. But PGO won on appeal and now Ascot-based Lifestyle Automotive has begun importing the Cévennes into the UK.

So what is it? Being the product of a French company, all the running gear is PSA-sourced, starting with the engine from the Peugeot 206 GTI. With just 137bhp from 2 litres it was hardly a rip-snorter even when it was new (and to be honest the 206 never really floated the evo boat either) but here it’s mounted amidships, driving the rear wheels, and there’s less weight to motivate (980kg plays 1125kg).

Performance is spirited rather than wildly rapid and the motor needs to be spinning at the top end of the rev range to give its best, which in itself isn’t a problem. It’s just a shame that it’s so quiet: you hope for a rorty rasp but all you get is a boringly muted humdrum thrum. The steering is only so-so, too: like the 206’s it’s light, lacks detail and is a little slow-witted – a combination that’d usually have us dismissing the PGO outright.

The Cévennes’ chassis recovers the situation, however. It’s obvious from the moment you pull away that the whole car has been well engineered. The fit and finish are first rate, there are no shakes, shimmies or rattles, and it feels at least as good as a product from a major manufacturer. More to the point, it rides beautifully and yet corners hard and fast with minimal body roll. It hangs on well through the bends, keying into the tarmac and slingshotting out with little fuss or wasted effort. It could certainly handle a lot more fire in its belly. As it stands, exceeding the available grip requires determination and, even when you do, it won’t catch you out – the chassis relays the information that the steering lacks and it’s surprisingly friendly for a mid-engined car.

Overall, then, a frustratingly missed opportunity. PGO has got all the hard bits right: everything it has designed, engineered and bolted together is on the money, but it’s let down by the PSA underpinnings. If you’re looking for something to cruise around the countryside in, this is fine, but we’d like to have the power and steering the chassis deserves.