Classic ’70s GT gets re-engineered for a new generation 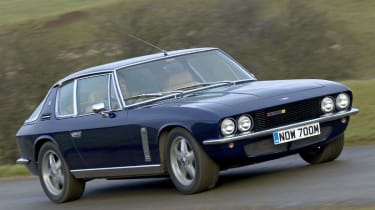 There is something compelling about the Jensen Interceptor that has kept its memory alive. The sound of the name still conjures up images of playboys and plutocrats blasting across Europe in the late ’60s and early ’70s in search of a well-shaken Martini.

The original 5000-odd Chrysler V8 powered cars were built in West Bromwich between 1966 and 1976 before the firm fell victim not only to the fuel crisis but also a variety of other business disasters. Since then there have been a variety of ill-conceived attempts to revive the brand. Happily this car, the Jensen Interceptor S, is not one of them.

It’s the work of Cropredy Bridge, the long-established Jensen specialist near Banbury that was bought last year by Tim Hearley and Alan Garnett of V Eight Ltd. From their previous experience at (respectively) Aston Martin and Morgan they recognised that the Interceptor was still an aspirational car for a whole generation of now-wealthy men who fantasised about owning one when it was new.

The plan at Cropredy is not to start making new Interceptors or even to own the name but to refurbish and gently re-engineer existing cars, of which there is a healthy supply. Fifty will be built to order over the next two years, each one based on a ‘carefully selected’ and fully de-rusted donor car, the finished product individually numbered and priced at £74,960. Given that you can buy probably the best Interceptor on the planet for thirty grand, the Interceptor S, as it has been named, has got to be one special Jensen, and in many ways it is.

Cropredy has resisted the urge to load the car with modern power assists or start fiddling too much with the aesthetics. Most of the changes are the result of improving function. Seventeen-inch wheels, in the style of the originals but of larger diameter, leave space for much bigger six-pot AP brakes and wide modern rubber, while a push-button starter in the middle of the fascia eliminates the Morris Marina ignition keys on the side of the steering column that tended to foul your knee.

Best of all, the original Chrysler V8, hideously thirsty and prone to overheating, has now been usurped by General Motors’ 6-litre LS2. Jensen claimed 272bhp for the last of its emissions-strangled 7.2-litre cars, and that was probably optimistic. This fully managed, all-alloy engine gives a genuine 430bhp and weighs in at ten stones less than the original. Driving through GM’s five-speed automatic it makes the once suavely powerful Interceptor terrifyingly quick. Tiny throttle openings produce dramatic results and you seem to be able to surge past everything in sight on 2000rpm or less. It erupts off the line and feels quicker than the claimed 5.9sec to 60mph. Owners of the ’70s cars will be even more amazed by the 23mpg consumption.

The most radical technical departure from the original is the single-wishbone independent suspension – a mix of reclaimed Jaguar X300 and XJ6 parts – that replaces the leaf-sprung live rear axle. It requires a lot of chassis grafting to fit, but this flat-cornering, neutrally balanced Interceptor can put its power down on bumpy surfaces in away the original never could.

It is not a 2008 GT, though, and requires a degree of thought and anticipation to drive quickly, the steering being the most unnerving thing. It’s a little dead around the centre, tramlines somewhat and has virtually zero self-centring, leaving a confidence gap that does not invite you to exploit the grip. It’s also one of those cars that feels bigger than it is, although by bloated modern standards it is actually shortish and rather slim.

Uprated classics have come and gone by the dozen over the years, but this Jensen is pitched at what feels like a realistic level. Cropredy says buyers – some of them bored with an endless succession of modern 911s and Ferraris – are forming a line for the Interceptor S. I think they’ll enjoy it.

Find used Jensen Interceptor's for sale on the Classic and Performance Car site.